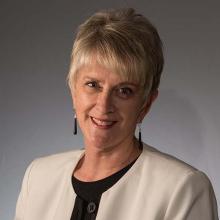 Chief Justice Ruth V. McGregor (Ret.) served on the Arizona Supreme Court from February 1998 until June 30, 2009. She was the Court's Chief Justice from June 2005 until her retirement. She was also a member of the Arizona Court of Appeals from 1989 until 1998, where she served as Chief Judge from 1995 to 1997. Before her appointment to the bench, Justice McGregor engaged in the private practice of law as a member of the Fennemore Craig law firm in Phoenix, Arizona. She served as law clerk to Justice Sandra Day O'Connor during Justice O'Connor's first term on the United States Supreme Court.

Justice McGregor currently serves as a member of the Board of Directors of the Center for the Future of Arizona and of Justice at Stake; as section delegate for the ABA Section of Legal Education and Admission to the Bar; and as chairperson of the O’Connor Advisory Committee at IAALS.