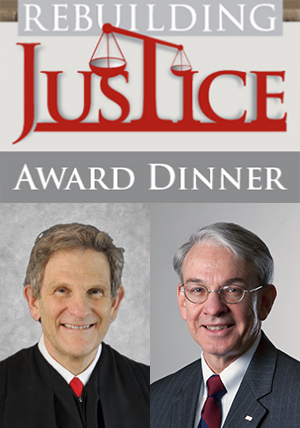 This spring, IAALS—the Institute for the Advancement of the American Legal System at the University of Denver—will hold its annual Rebuilding Justice Award Dinner, which recognizes individuals who exemplify the spirit of innovation and leadership that we champion across all of our work toward building a legal system that is fair, accessible, reliable, efficient, and accountable.

This year, we are thrilled to be honoring two longtime supporters of IAALS and our work: Colorado Supreme Court Chief Justice Michael L. Bender (Ret.) and University of Denver Chancellor Robert D. Coombe.

“Chief Justice Bender was on IAALS' Board of Advisors during our first few years of existence,” said IAALS Executive Director Rebecca Love Kourlis. “We learned from him as we shaped our approach and our mission, and were then able to provide materials and ideas for some of his many successful initiatives as Chief Justice. We celebrate his accomplishments in the Colorado Courts, and his national leadership.”

“Chancellor Coombe is one of the pillars of IAALS' success,” said Kourlis. “He has served on the Executive Committee of IAALS from the beginning and helped us forge the initial vision for IAALS, and then build it over the last eight years—through thick and thin. He integrated us into the richness of the University community, and also supported our national outreach. We are profoundly grateful to him, and celebrate his steadfast, visionary, and evenhanded leadership of IAALS, as well as of the University.”

Chief Justice Bender served on the Colorado Supreme Court for 17 years and was the Chief Justice from 2010 until January 2014. During his tenure as Chief Justice, Bender supported numerous specific measures designed to increase access to justice and to improve procedural fairness in the state judicial system and in the legal profession as a whole.

Dr. Coombe began his 33-year association with the University of Denver in 1981, when he joined the faculty as an assistant professor of chemistry. He became provost in 2001, and became the 17th chancellor of the university in 2005. As the institution's chief executive officer, Dr. Coombe leads a private, doctoral/research university that enrolls approximately 12,000 students. He is retiring as chancellor in June.

The dinner and award ceremony will be held April 24, 2014 at the new Ralph L. Carr Colorado Judicial Center in Denver, which was constructed during Chief Justice Bender's tenure. Click here for more information.

The first recipient of the IAALS Rebuilding Justice award was United States Supreme Court Justice Sandra Day O'Connor (Ret.) in 2007. IAALS has given the award to former chief justices of state supreme courts, legislators, federal district court judges, and legal educators. This will be the 7th Annual Award.