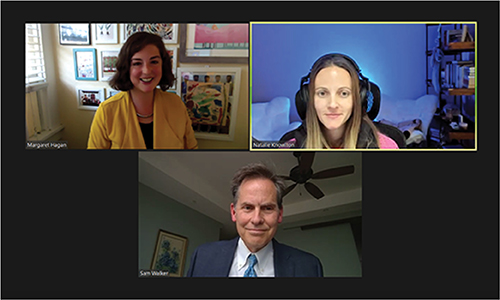 On Tuesday, October 20, IAALS hosted a virtual Rebuilding Justice Award Celebration after our annual gala was postponed in April. Instead of gathering for dinner as we normally do, we were joined by people from all over the country and world via Zoom to honor both Margaret Hagan and the late Iowa Supreme Court Chief Justice Mark Cady for their leadership and innovation in advancing our justice system. The two have inspired the movement toward user-centric reforms in family courts—leading to better pathways for families nationwide.

“The arc of the moral universe is long, but it bends towards justice. The two awardees that we will celebrate today have not only been on that moral arc, but they have helped to bend it toward justice—in their work, and in their legacy.”

Walker spoke to Hagan’s invaluable partnership on our Court Compass project, which brought together courts and communities to build better family courts: “This project and her broader work exemplifies the spirit of IAALS, as we imagine—in the broadest way possible—how people connect with our legal system.” Walker also remarked on Chief Justice Cady’s commitment to the Family Justice Initiative and its efforts to refocus family courts on problem-solving and facilitating cooperation. “His work was really at the heart of what we do and advanced so much of the cause that [IAALS] imagined, as he advanced fairness, access, and transparency in the justice system.”

We are honored to have had Chief Justice Cady among our partners and friends at IAALS.

Margaret Hagan provided the keynote of the event, focused on her latest project at the Stanford Legal Design Lab addressing the eviction crisis—which the COVID-19 pandemic has exacerbated. Through the lab’s community-led design approach, she said, “we are going out and talking to people—whether they’re front-line service workers in the courts and legal aid groups, or people like self-represented litigants and other folks trying to navigate the process—and hearing what their barriers [are], or what they’re able to do or not do on the ground. [We also work] alongside those folks to design new policies, to think about what new types of court procedures, or legal aid services, or technology tools might be possible.”

Hagan’s commitment to improving our justice system—from family justice to the eviction crisis and beyond—is extraordinary, and we are sure she’s only getting started.

Margaret Hagan and Chief Justice Mark Cady exemplify the spirit of innovation and leadership that we champion across all of our work, and we are proud to present them with the 2020 Rebuilding Justice Award.