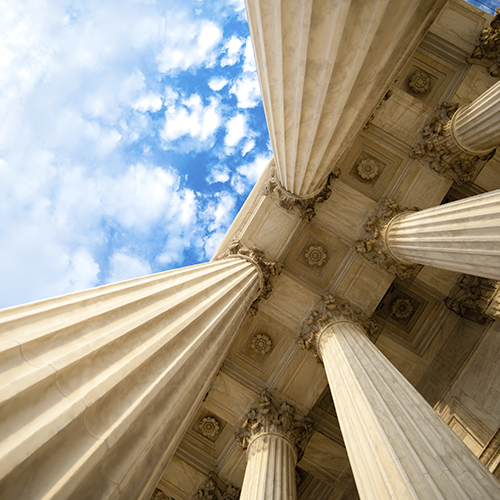 At the mid-winter Conference of Chief Justices meeting in late January, the Civil Justice Improvements Committee presented its draft recommendations to the Chiefs. The panel included Judge Greg Mize who is the reporter for the project, Judge Jennifer Bailey of Florida, Judge Jerry Abrams of Minnesota, Paula Hannaford-Agor of the National Center for State Courts, and Chief Justice Tom Balmer of Oregon, who chairs the Initiative. I was present as an observer so that, as we complete the work of the recommendations, we can take the input from the midwinter meeting into account.

Paula first summarized the findings of the Landscape of Civil Litigation in State Courts study that NCSC completed last fall, which shows that a large percentage of cases in state courts are small contract cases: cases in which there is often a self-represented defendant and a dismissal or a default. The percentage of larger, complex cases is tiny by comparison.

The group then proceeded to outline the recommendations coming out of the work of the CJI Committee:

The Chief Justices broke into small groups to discuss the recommendations, and then reconvened to report out on the respective observations. Many of the Chiefs balked at framing the recommendations as just the reduction of cost and delay in the system, and rather were more focused on having a greater goal of reenergizing the system to provide better service to litigants in general and to open the doors to increased access. They focused on some hurdles to implementation of the recommendations, and suggested ways to overcome those hurdles. They brought experiences from their own jurisdictions into the conversation—things that have worked and not worked. They also talked a great deal about the technology needed to accelerate the implementation of recommendations. One Chief Justice quipped:

“The courts are really good at implementing yesterday’s technology tomorrow, and we have to change that.”

The sessions were rich and productive, and as IAALS and NCSC work to finalize the recommendations, the feedback we received will be critical.

The next forum in which there will be an opportunity for feedback on these recommendations, as well as on a host of other ideas, will be at our Fourth Civil Justice Reform Summit in just 15 days. We still have some spots left, and we urge you to attend. If you are interested in having a voice, or in just knowing what is happening around the country, please spend a day and a half with us, and with the extraordinary group of panelists who will be congregating (some from around the world, literally).

The Summit will provide the opportunity for dialogue, but it will also be a call for action. We hope you will come to the Summit and be a part of both.