Courts Must Change to Serve Increasing Victims of Natural Disasters 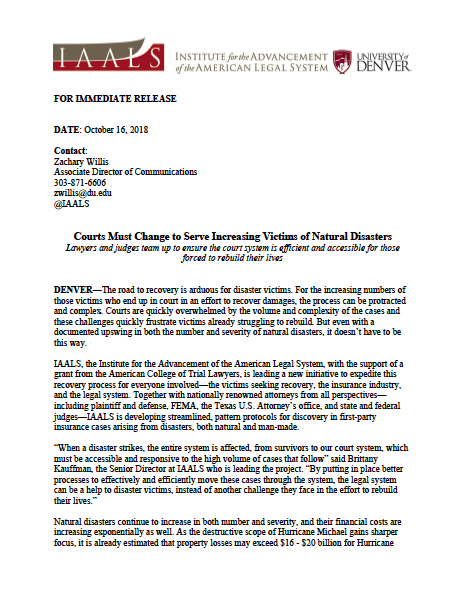 The road to recovery is arduous for disaster victims. For the increasing numbers of those victims who end up in court in an effort to recover damages, the process can be protracted and complex. Courts are quickly overwhelmed by the volume and complexity of the cases and these challenges quickly frustrate victims already struggling to rebuild. But even with a documented upswing in both the number and severity of natural disasters, it doesn’t have to be this way.

IAALS, the Institute for the Advancement of the American Legal System, with the support of a grant from the American College of Trial Lawyers, is leading a new initiative to expedite this recovery process for everyone involved—the victims seeking recovery, the insurance industry, and the legal system. Together with nationally renowned attorneys from all perspectives—including plaintiff and defense, FEMA, the Texas U.S. Attorney’s office, and state and federal judges—IAALS is developing streamlined, pattern protocols for discovery in first-party insurance cases arising from disasters, both natural and man-made.

“When a disaster strikes, the entire system is affected, from survivors to our court system, which must be accessible and responsive to the high volume of cases that follow,” said Brittany Kauffman, the Senior Director at IAALS who is leading the project. “By putting in place better processes to effectively and efficiently move these cases through the system, the legal system can be a help to disaster victims, instead of another challenge they face in the effort to rebuild their lives.”

Natural disasters continue to increase in both number and severity, and their financial costs are increasing exponentially as well. As the destructive scope of Hurricane Michael gains sharper focus, it is already estimated that property losses may exceed $16 - $20 billion for Hurricane Florence, putting it within the Top 10 costliest hurricanes to hit the United States. Along with China and India, the United States has suffered the greatest number of natural disasters globally over the last several decades, including storms, floods, fires, and heatwaves. Over this time, the country has also witnessed the devastating effects of other disasters; the 9/11 terrorist attacks created an estimated $55 billion in damage in New York alone.

The court process that can follow for those with insurance recovery disputes can be challenging and complex for all involved. This is magnified by the large volume of cases that are filed in a short time period. While the parties and the court each come with a different perspective, everyone involved has the shared goal of an accessible, fair, and efficient process.

Among the group working on this effort is Jordan Fried of FEMA, who is currently FEMA’s Associate Chief Counsel for Federal Insurance & Mitigation. He has served as supervising counsel for FEMA on a number of major disaster cases, including the Hurricane Sandy flood insurance litigation and a series of post-Katrina disaster housing cases. “Having seen firsthand the devastating flooding on our coasts and how property damage insurance cases can languish in our courts, there is much room for improvement,” he said. “Protocols like these have the ability to fundamentally change the time that it takes to resolve disaster cases.”

And, whether a disaster is natural or not, making courts more efficient in disaster-related matters will be of great benefit. “The 9/11 litigation revealed a system fraught with delays and setbacks that were only overcome through herculean efforts of the supervising judge to bring the claims to resolution,” said Douglas J. Pepe, who served on the Court-appointed Executive Committee charged with directing the property damage claims arising out of the terrorist attacks. “I’m excited to be a part of this effort to give courts better tools to handle mass disaster claims, with a keen focus on the needs of victims in the most trying of times.”

IAALS has already released similar protocols for other case types, including employment and Fair Labor Standards Act cases. Judges who have implemented those streamlined procedures report a significant improvement in how the cases are handled before they reach resolution. “We are already seeing the influx of cases in our Texas federal courts from Hurricane Harvey and those numbers will continue to grow exponentially in the next six months,” said Chief Judge Lee Rosenthal of the U.S. District Court in Houston. “I am eager to incorporate these disaster protocols in our court in Texas to ensure early and efficient resolution for all.”

IAALS plans to release these Disaster Litigation Initial Discovery Protocols early next year and will then encourage courts and judges across the country to implement them.