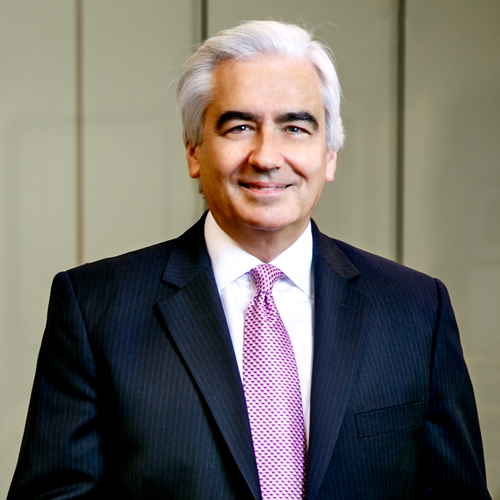 Bill has been involved with IAALS since 2012, when we launched the Honoring Families Initiative Advisory Committee on which he serves. We have worked together on our original vision-paper, on the Center for Out-of-Court Divorce, the Family Bar Summit, The Modern Family Court Judge, and now our online dispute resolution project called Court Compass.

At every turn, every phone call, every email, Bill has been a generous, responsive, and wise partner. He never fails to elevate the conversation to one of purpose and mission, bringing out the best in all participants. Bill loves life and sees the big picture. He is an enthusiastic supporter of the arts, and particular poets (he's even nominated two Oregon Poet Laureates and he and his wife Joy have supported numerous publications of poetry). The couple are also inveterate travelers (he windsurfs), and lovers and creators of good theatre. Bill has a lyric soul.

In his office in Portland, he has a Middle Eastern rug. Bill tells the story that the rug merchant, who suffered some dire circumstances, has become a friend and Bill and Joy have hosted him and helped him in a variety of ways. That’s Bill. I imagine that Bill started chatting with the merchant while he was negotiating for the rug, and was drawn in by his story. Most probably, right then and there, Bill decided that he would help the merchant—and then, that is exactly what he did: in more ways than could ever have been anticipated.

We caught up with Bill Howe for this month’s Partner Profile Q&A.

Who is your favorite modern-day person? So hard to limit to one, there are so many admirable people. I must mention at least two. Kim Stafford, a poet, writer, teacher, and one of the wisest and kindest individuals I have ever met. His father, William Stafford, was poet laureate of the U.S. in 1975 and of Oregon for 18 years. Kim is every bit as talented as his father and has been a wise mentor and teacher to me and so many others. The other is Barack Obama who, having risen from difficult circumstances, excelled and always modeled such intelligence and decency and calm good judgment. He is the paradigmatic example of how an adult should act. His recent tweet about the Charlottesville tragedy is the most recent example.

What do you consider the most overrated virtue to be? Loyalty when it dictates silence in the face of misbehavior. It dishonors the recipient and diminishes the giver to support one who is misbehaving only out of habit or past allegiance. True friends/business associates/political allies should not enable mistakes or misconduct solely out of loyalty.

What is your greatest extravagance? Following my bliss and my own schedule as much as possible, being in the moment.

What is it that you most dislike? Pretentiousness and selfishness.