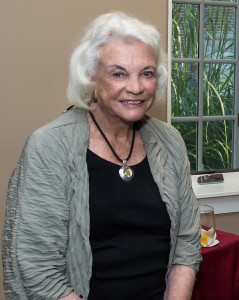 Justice Sandra Day O'Connor spent a few days last week with us here at IAALS. On Monday, we held a meeting of the O'Connor Advisory Committee to the Quality Judges Initiative, the membership of which includes not only Justice O'Connor, but former Chief Justice Ruth McGregor of Arizona, Chief Justice Wallace Jefferson of Texas, former Senator Bob Graham of Florida, and former Governor Christine Todd Whitman of New Jersey. The Committee provides guidance for our work in the areas of research and consensus building on the ways to select and evaluate judges so as to assure the highest quality courts around the country. On Monday, we focused our attention primarily on the composition and transparency of nominating commissions in states that use such commissions to tee up nominees for gubernatorial appointment—and the kinds of projects we could undertake to determine whether either of those factors impact public trust and confidence in the system.

Justice O'Connor also visited the new Colorado Judicial Learning Center—a state-of-the-art facility designed to teach students about the Rule of Law in an engaging and interactive way. She is a strong supporter of civics education in our schools, which she promotes through her iCivics program.

On Tuesday, Justice O'Connor spoke to a class at North High School, and then spent the rest of the day with students and faculty at the University of Colorado Law School. That evening she engaged with Professor Melissa Hart, the Director of the Byron R. White Center for the Study of Constitutional Law, in a "fireside chat" under the rubric of the John Paul Stevens Lecture about her life and career. Ruth McGregor and I joined her for the conversation, but it was Justice O'Connor who stole the show. The Stevens Lecture brings a well-known jurist to Colorado Law each year and is open to the public, and IAALS was a co-sponsor of the event this year. The inaugural lecture was delivered in 2011 by former U.S. Supreme Court Justice John Paul Stevens and the 2012 lecture by Justice Ruth Bader Ginsburg. 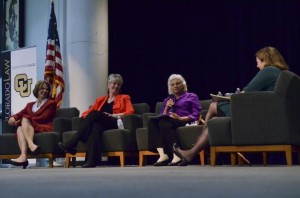 Justice O'Connor is 83 years old. She was appointed to the United States Supreme Court in 1981. Many of us reading this piece have lived through a cultural revolution, with Justice O'Connor leading the charge. In 1970, women comprised only 8% of the total law school enrollments in the United States. As of 2011, women comprise 31% of all lawyers in the United States and 47% of all students at ABA-accredited law schools. The path has not been a smooth one, and—as with history in general—it is wise to remember where we have been.

We are honored to have Justice O'Connor affiliated with IAALS, and we benefit greatly from her wisdom.