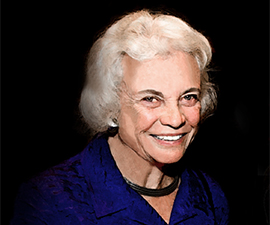 On March 12, retired U.S. Supreme Court Justice Sandra Day O'Connor was inducted in the Arizona Women's Hall of Fame as a Living Legacy. The Hall of Fame “pays tribute to the remarkable women whose contributions to the arts, athletics, business, education, government, the humanities, philanthropy, and science, have played a significant role in the history of Arizona, and provide a significant contribution to the historical record of the State of Arizona.” Justice O'Connor was raised on a ranch near Duncan, Arizona, and was selected for her “decades of work as a judge and her legacy as the first woman appointed to the nation's highest court."

Justice O'Connor launched the Quality Judges Initiative at IAALS in 2009, and worked with IAALS to develop and produce the O'Connor Judicial Selection Plan, a four-part recommended process for selecting and retaining state court judges who inspire public trust in our courts and the integrity of their decisions.