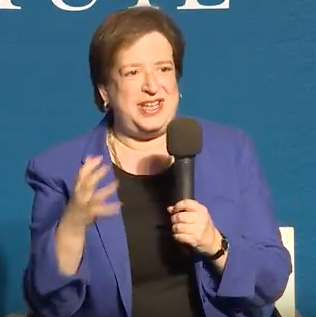 Aspen has been the home of things of great value for a long time… beginning with silver. Today, one of the treasures in Aspen is the Aspen Institute. It was founded in 1950 to promote the “appreciation of open minded ideas and values, open dialogue and enlightened leadership.” One aspect of the Institute is the Justice and Society program, which focuses on issues related to the meaning of justice and how a just society ought to balance fundamental rights with public policy.

This year, the Justice and Society program debuted a four-year speaker series named after Justice Sandra Day O’Connor. Justice O’Connor is no longer able to travel, so she was not present—although her son Brian and his wife were there. Justice O’Connor promised that she was going to watch the event by video link, and I am sure she did.

The first speaker in the series was Justice Elena Kagan, who—of course—was appointed to the United States Supreme Court in 2010. She was joined on the podium by Arizona Chief Justice Ruth McGregor (Ret.), Chair of the O'Connor Advisory Committee here at IAALS, and Chief Justice Margaret Marshall (Ret.) of the Massachusetts Supreme Court.

Justice McGregor began the program with some reflections about Justice O’Connor—for whom she clerked in her first term and who remains a very close friend. Ruth talked about where she was and what she was doing when she heard that Justice O’Connor had been appointed to the Court: what a turning point it was in the life of our nation, and particularly in the life of the women lawyers in our nation. I, too, remember that moment. And, oddly enough, I was in Aspen.

I was a five-year lawyer at the time, affiliated with Gibson, Dunn & Crutcher and also running a small law office in Craig, Colorado, and I was visiting a client in Aspen. The news that a woman had been chosen to serve on the Court was, for me, probably akin to the moment when silver was discovered here. The world shifted and the future was different from that moment on.

Justice Kagan spoke about the pivotal role Justice O’Connor played in the Court’s decisions over the course of her tenure—often casting the one vote that truly decided the case, and doing it in a way that was conciliatory and visionary, so as not to polarize the Court or the nation. She reflected on Justice O’Connor’s pragmatism, and her remarkable capacity to keep her finger on the pulse of the nation while still remaining true to the mandates of the law.

Justice Marshall, for her part, talked about the independence of the judiciary and how fragile it truly is—how quickly we could lose it if we are not vigilant.

iCivics partnered in the event, which is Justice O’Connor’s online civics education program, and all of the speakers talked about the importance of assuring that young leaders understand the importance of the courts in our constitutional democracy.

The event took place on the Aspen Institute campus, in a tented gathering place surrounded by wildflowers and aspen trees—and nestled at the base of towering mountains. It occurred to me that we as a nation are so profoundly blessed: by our natural resources, the beauty of our country, by the extraordinary commitment of the men and women who lead us, and by our potential to do good and to create a just nation.

Justice O’Connor understands all of that—and her vision animates many of us, including those of us at IAALS.