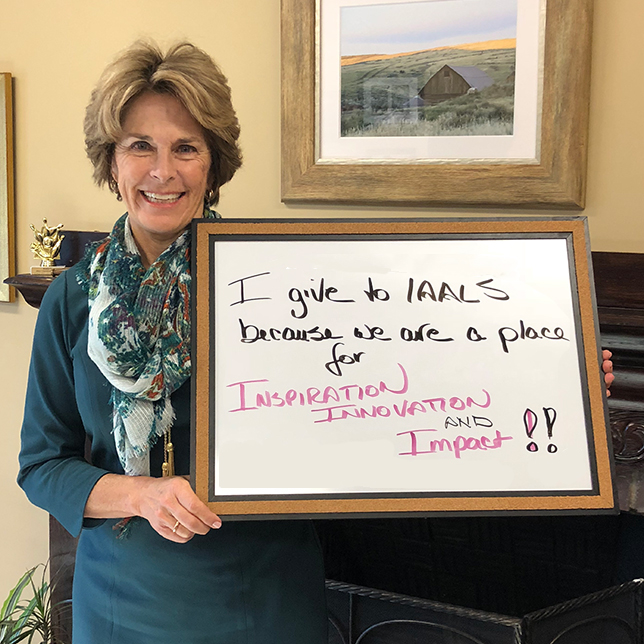 For Becky Kourlis, justice for all isn’t simply a phrase we repeat as Americans. It is a calling to a higher principle of our democracy that must be preserved and protected. By giving to IAALS, you can help IAALS continue to work toward ensuring access to justice for all who need it and honor Becky’s lifetime of service.

After completing a distinguished, 30-year career as a lawyer in private practice, a judge riding circuit in Northeastern Colorado, and finally a Colorado Supreme Court Justice, Becky opted to turn her dedication into a different kind of advocacy. More than 13 years ago, she helped to establish IAALS, which she has built into a driving force for positive, practical change in the civil justice system. Now retired as Executive Director in September 2019, we look back on her amazing legacy.

Today, IAALS stands as a nationally recognized think-and-do tank, where diverse and divergent groups come together and reach consensus on solutions to some of the legal system’s most complex and persistent problems—which IAALS can then implement. Under Becky’s leadership, IAALS has:

Your gift in Becky’s honor can ensure that IAALS will continue to work for fair, impartial, and practical reforms and improvements within the legal system.

When you click below to make your gift online, please leave us a note in the comments section telling us why IAALS and Becky’s work has been important to you, important to our legal system, and important to our country. And, let us know how to reach you should you wish to share a story or testimonial.

Colleagues and Partners Share Stories in Honor of Becky and IAALS

“When we first started discussing the creation of IAALS, it became clear that Becky was one of the few people who could successfully lead the organization, tackling the challenges within our legal system, and facing its complex issues head on. It could not be anyone with an agenda other than making access to and delivery of justice more fair and cost-effective. That is exactly what Becky has done.”

When Diane Gates Wallach and Rebecca Love Kourlis met as two middle schoolers, they could never have known how their paths would cross again much later in life.

Yet decades later, they found themselves deeply engaged in creating a better legal system—one that fulfills its promise for more people—and a judiciary that serves effectively as the third pillar of our democratic system. They came to this shared goal from very different vantage points: Diane, a businesswoman who felt her dealings with the system were far more complicated and expensive than they needed to be, and Becky, who worked within that system as an attorney at a large law firm, solo practitioner, trial court judge, and Colorado Supreme Court justice.

Diane has taken a particular interest in the far-reaching improvements to the rules of civil procedure, which has been spearheaded by Becky and the IAALS team. While the work itself is complex and often obscure for the average person, its implications reach across every civil courtroom in the country—making the litigation process more efficient and cost-effective. And Becky and IAALS’ focus on changing the adversarial nature of divorce has also been an example of creative, collaborative solutions that could become models for dispute resolution that happen outside the courthouses and address the complexities of family relationships.

While IAALS’ founders hoped it would put itself out of business in a few years, the need for additional reform and reimagination continues. Enter former Arizona Supreme Court Chief Justice Scott Bales. With Becky’s retirement, Scott will serve as IAALS’ second executive director, bringing with him the same broad and deep experience within legal system. And the same commitment to a focus on improving the delivery of justice.

Diane is proud of IAALS’ many accomplishments and is encouraged by the future of IAALS’ work. She sees the change in leadership as a healthy next chapter for the organization—a chapter that if full of new opportunities to further the IAALS mission and impact.

In the early 2000s, a national movement was ignited to instigate reform of civil procedure and trial court management. The effort to bring more accessible, affordable justice to the courts and the citizens they serve is still growing—both state-by-state and in the federal courts. Our collective effort has kept that fire burning, but it was Becky Kourlis and her then-new organization, IAALS, that first lit that match.

My relationship with IAALS started with an opinion piece I wrote in 2005 for the American College of Trial Lawyers (ACTL). In it, I was passing along the wisdom of my law school dean, a staunch advocate of the Federal Rules of Civil Procedure. I noted that procedural rules were merely tools that may periodically need to be changed as times change. Becky read that piece and saw a natural alignment between my comment and her goals, and I was recruited for the organization she was creating.

Anyone who knows Becky, knows her hands-on approach. She will, without a moment’s hesitation, jump on a plane to meet in person—so before officially asking me to join the Board of Advisors, Becky, being Becky, came to Charlotte to check me out. Soon after, I visited IAALS in Denver. In a borrowed office, I found a small reception area and two rooms, one populated by six staffers, the other by Becky. On her wall was a framed photo of her as a child, sitting on her Colorado governor father's lap.

Becky explained that the problem she saw was a growing barrier universally described as "the vanishing civil trial." She had heard what others had also heard, that the Advisory Committee of the Federal Rules of Civil Procedure was unlikely to take the lead on change and that change must thus begin in the state courts.

Soon thereafter, she participated in a national ACTL program, where she spoke and heard this same opinion. In true Becky fashion, she listened and formed a thoughtful strategic plan to bring about change. 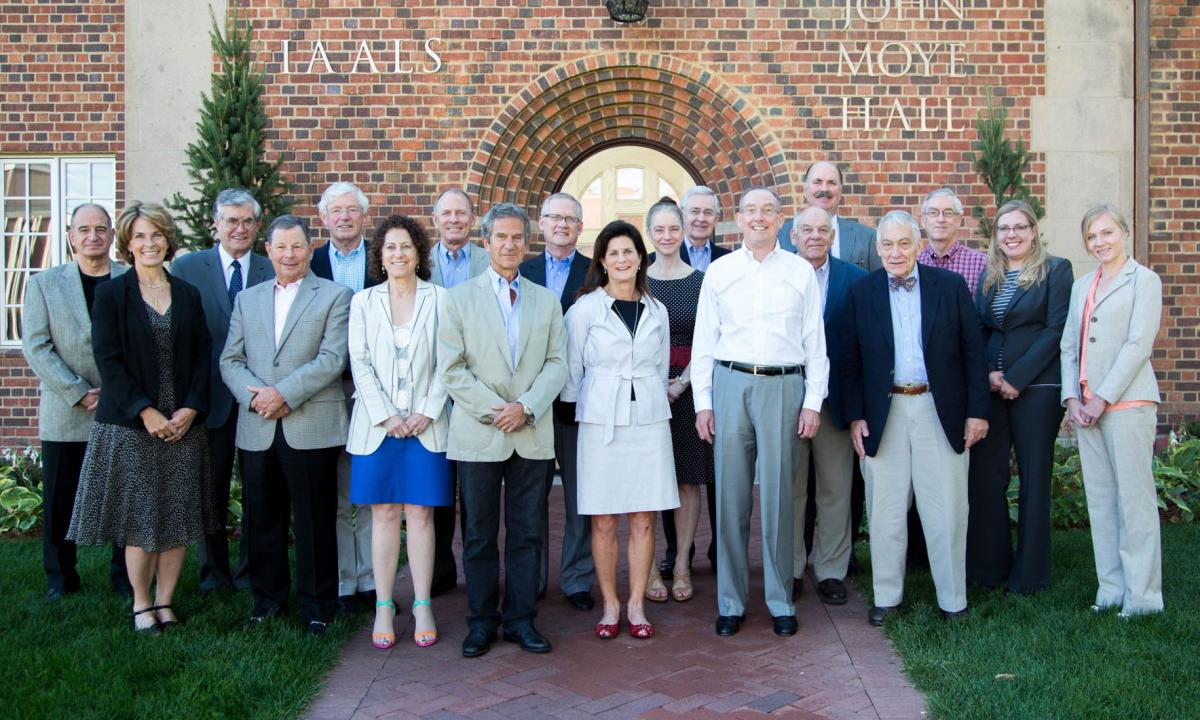 She approached the ACTL, asking about the possibility of a joint task force that would combine IAALS' research and staffing experience with the knowledge and practical experience of a group of civil trial lawyers from the American College. The College accepted the challenge and a joint task force resulted.

From the beginning, this effort included members who ranged from smaller local firms to mid-sized regional firms to major metropolitan ones. It included both a federal trial judge from the United States and an appellate judge from Canada, a fortunate choice, since the task force quickly found that discovery was not the only problem. Too many judges had become "docket managers" instead of trial judges, contributing to the growing barrier.

As time went on, the task force found gaps, such as the need to add plaintiff-oriented trial lawyers and those from emerging specialties. In a few years, the federal rule-makers themselves took notice and began cautiously to get on board.

Monitored pilot projects were implemented, testing the task forces’s original principles outlined. The results were then used to tweak and improve the work and recommendations. In the end, ten years from its beginning, the task force put forward and saw adopted—by both IAALS and the ACTL—necessary reforms of the existing civil rules. It then built support for those reforms among lawyers, judges, and courts across the nation, advancing the implementation of these much-needed changes.

The task force's work over that first ten years to reform civil procedure and provide reasonable, proportionate access to justice for all civil litigants began a national movement that continues to grow, even expanding to other related problems.

And it was Becky Kourlis who first created the idea, first lit the match, and first joined the appropriate forces to ignite real change. And it is Becky who has kept it going to this very day.

I had the pleasure of working with Becky on the Civil Justice Improvements Committee and, through that experience, had the opportunity to witness what she brings to the table. For me, Becky’s greatest strength lies in her ability to listen carefully to differing ideas and views, and then synthesize and capsulize those ideas in a cogent and streamlined manner. In leading the discussions, she asked committee members to both think outside of the box and at the same time remain practical. As a result, she ultimately helped the committee produce a product that was accessible and politically feasible for states throughout the country while at the same time highly innovative. As a former judge, she understood the parameters of what a judicial system can and cannot do, which was also incredibly helpful in delivering the final product. As a direct result of Becky’s contributions to this project, civil justice has been advanced in ways that would have been unfathomable even five years ago.

To begin to measure their contributions, ask yourself: what was pre-IAALS, pre-Becky Kourlis? I’d say a civil justice system stuck in the mid-twentieth century, ill-fitting the public it served, and contentedly so. The Federal Rules of Civil Procedure, effective in 1938, and eventually adopted in most states, delivered all the reform we would ever need. But as dockets multiplied by orders of magnitude, as cases became both simpler and more complex, and as technology was relentlessly changing everything, the need for reform grew pressing. Interestingly, IAALS was formed, with Becky at the helm, 100 years after Roscoe Pound’s speech to the American Bar Association on The Causes of Popular Dissatisfaction with the Administration of Justice, which launched the 20th century reform efforts.

IAALS provided a place to talk, look, and do—a forum to discuss deficiencies in the civil justice system, a resource to study promising reforms, and perhaps most importantly, concrete proposals to get them done. Data, wisdom, and practicality are all essentials. But the system is so complex in structure and operation, IAALS would get nowhere without the advice and assistance of the best minds on the subjects. How to involve them? Enter Becky. Who can tell her no? Has anyone ever seen her told no? Nothing is so inspiring as a charismatic proponent of a worthy cause.

IAALS was formed to answer popular criticism of the legal system that was unfair and wrong, to rededicate its participants to cleaning their own house and rebuilding when necessary, and to produce results that will build public confidence in justice. Much good has been done. Much work remains. IAALS is on the case. Thanks to Becky.