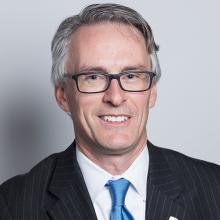 Dean, University of Denver Sturm College of Law
IAALS Affiliation:IAALS Board of Advisors

Bruce Smith is the Dean of the University of Denver Sturm College of Law, having served in that role since July 2016. Previously, he was Professor of Law and Guy Raymond Jones Faculty Scholar at the University of Illinois College of Law, where he was Dean from 2009-14. In the latter capacity, he successfully completed a $50 million capital campaign; launched an innovative Chicago Program, three new clinics, and a postgraduate public interest fellowship program; and recruited a dozen new faculty members to campus. Dean Smith has been a visiting faculty member at the University of Michigan Law School, the George Washington University Law School, and the University of Luxembourg. From 1996-2001, he practiced in the litigation group at Covington & Burling LLP in Washington, D.C., where he focused on intellectual property litigation and sports law, representing the NFL, NHL, and NBA, among other clients.