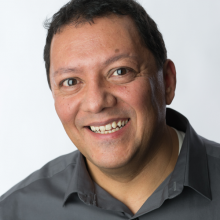 Carlos A. Manjarrez is the Chief Data Officer at the Legal Services Corporation (LSC), the largest single funder of civil legal aid for low-income Americans in the nation, funding programs in all 50 States, Puerto Rico, and the U.S. Territories. He has over 20 years of experience in social, economic, and cultural policy research. Prior to LSC, he worked as a housing policy researcher at the Urban Institute and then served as the research director of the Institute of Museum and Library Services, where he established the first cultural data collection program in the U.S. Federal Statistical System. An urban planner by training, he leads a team of data scientists and social researchers charged with gathering, analyzing, visualizing, and reporting on civil legal data. He has received grant and contract support from a wide variety of federal agencies and national foundations, including the Andrew W. Mellon Foundation, Annie E. Casey Foundation, the Bill and Melinda Gates Foundation, Department of Housing and Urban Development, Kresge Foundation, Hewlett Foundation, the Mellon Foundation, the National Endowment for the Arts, and the World Bank Group.