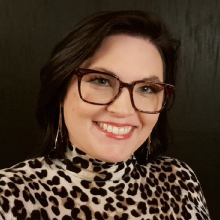 Farrah Fite communicates and promotes—using traditional and new media—the wide range of services and resources The Missouri Bar provides to help lawyers even better serve their clients. Since 2012, she has led the Missouri Judicial Performance Review Committee’s voter awareness efforts when it comes to publicizing the committee’s findings. In 2020, following the retirement of Gary Toohey, Fite serves as the committee’s staff liaison, supporting the JPR Committee’s work in all respects. She also works with the bar’s officers and JPR Committee chair when it comes to developing message maps for key issues, media training, and speech writing. Fite says she is most passionate about shaping messaging that makes sure audiences get “What’s In It For Me” and communicating with audiences on the platforms they prefer.

The Missouri Bar provides administrative, technological, and financial support for Missouri’s independent Judicial Performance Review Committee. The 21-member statewide committee reviews the performance of an average of 50 appellate and nonpartisan circuit-level judges seeking retention in the November general election every two years. These judges must seek retention by the voters after their first 12 months on the bench and at the end of each term. The committee references juror surveys, lawyer surveys, and samples of written opinions to determine if a judge substantially meets overall judicial performance standards. The committee has worked routinely with its counterparts across the nation through the JPE Working Group to ensure best practices and the elimination of conscious and implicit biases to the greatest extent possible. Since a formal judicial performance review program was implemented through Supreme Court of Missouri rules in 2008, participation by Missouri voters in retention elections have continued to improve. In 2020, more than 2.6 million voters participated in judicial retention elections through the Missouri Non-Partisan Court Plan. Those voters represented 87% of voters who participated in the state’s gubernatorial race. This participation level set a record in Missouri since 2008 when participation tracking began under a modern judicial performance review process.

Before joining the bar world in 2012, Fite headed up communications for the Missouri Senate. She is a former journalist, having worked as a local TV reporter in Missouri and an associate producer at ABC News in Washington, D.C. She lives in Jefferson City, Missouri, with her spouse Gus Wagner, her dad J.B. Fite, Reeny the cat, and Binnie the corgi.