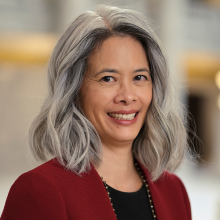 Since 2016, Jennifer MJ Yim has served as the executive director of the Utah Judicial Performance Evaluation Commission (JPEC), an independent state government commission that evaluates the performance of Utah judges for voters.

Yim received a BA in sociology from Pomona College. From the University of Utah, she earned an MPA, a graduate certificate in ethics and public affairs, and a Ph.D. in political science, with emphases in public administration and political theory. Her dissertation received the Leonard D. White Award for the best dissertation in public administration by the American Political Science Association. Yim’s current interests include the impact of bias and noise on group decision-making and conceptions of fairness in the justice system. She looks for ways to bring academic insights to the public sector.