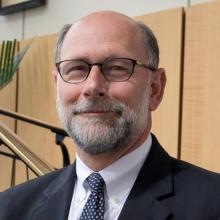 Luke Bierman is Dean of Elon University School of Law. Formerly, he was the Associate Dean for Experiential Education and Distinguished Professor of Practice of Law at Northeastern University School of Law in Boston. Professor Bierman oversaw the School of Law’s innovative and unique curriculum that combines theory and practice, including the Cooperative Legal Education Program, Clinics and the Legal Skills in Social Context first-year course, ensuring students are ready to practice with the full complement of knowledge, skills and ethical and social values necessary to serve clients and the public interest, now and in the future.

Previously, Professor Bierman served for almost four years as general counsel to the New York state comptroller, who is the sole trustee of the state’s $130 billion pension fund and the state’s chief fiscal officer for the state of New York’s $130 billion budget. As general counsel, Professor Bierman was responsible for legal advice and counsel on all matters relating to the comptroller’s constitutional and statutory responsibilities, including fiduciary, governance, ethics, litigation, investment, pension benefits, state and municipal finance and legislative matters. He also served as a member of the board of directors of the Council of Institutional Investors, where he co-chaired the policies committee.

Earlier in his career, Professor Bierman served as a fellow in government law and policy at Albany Law School. He also has served as director of the Institute for Emerging Issues at North Carolina State University, where he held the rank of associate professor of political science; as founding director of the Justice Center and special assistant to the president of the American Bar Association; as visiting specialist in constitutional law with the rank of associate professor at The Richard Stockton College of New Jersey; and as law clerk to justices and as chief attorney of the New York Supreme Court, Appellate Division, Third Department. Professor Bierman also has taught at Albany Law School, Northwestern University School of Law, the University at Albany and Trinity College in Hartford.