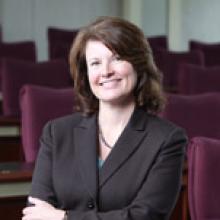 Professor Lynch specializes in violence against women issues, criminal procedure, and clinical education. She is the director of the Center for Excellence in Law Teaching (CELT), the editor and frequent contributor to the award-winning Best Practices for Legal Education blog, and serves as the 2015 co-president of the Clinical Legal Education Association, an organization of more than 1,200 law teachers who are experts in facilitating the formation of students into lawyers of excellence. She also serves on the advisory Board to the Journal of Experiential Learning. In 2014, she received Albany Law School’s Excellence in Teaching award and the Kate Stoneman Special Recognition award for her contributions to the advancement of women in the legal profession.

Prior to joining the Albany Law faculty in 1989, Professor Lynch worked as an appellate and trial attorney in the New York County District Attorney’s office. In 1996, while serving as director of the school's Domestic Violence Law Project, Professor Lynch and seven Albany Law School students won clemency for an incarcerated battered woman. This marked the first time in New York that an incarcerated battered woman who killed her abuser was granted clemency. Professor Lynch currently supervises students in the Domestic Violence Prosecution Hybrid Clinic in which students prosecute batterers and sexual offenders in SVU units throughout the Capital Region.