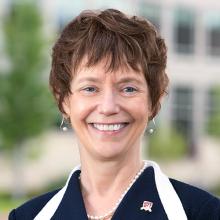 Rebecca Chopp, Ph.D., has been chancellor of the University of Denver since September 2014. Informed by a campus-wide listening tour during her first 100 days, Chopp announced a community-wide strategic planning effort called Imagine DU. Through consultation with thousands of community members, the planning process is focused on transforming knowledge (in terms of teaching, research, and scholarship), the student experience inside and outside the classroom, and the University’s relationship with Denver and beyond. Chopp has emphasized the importance of community—among students, faculty, staff, alumni, and friends of the University—and creating a welcoming and inclusive campus where people from all backgrounds can thrive.

From 2009 to 2014, Chopp was president of Swarthmore College, founded in 1864 outside Philadelphia and ranked the third-best liberal arts college in the United States by U.S. News and World Report. At Swarthmore, Chopp passionately upheld the College's longstanding commitment to admitting the most highly qualified students without regard for their financial circumstances. She supported innovative ways for faculty and students to interact at Swarthmore and extended the distinct role the school plays in educating students to build inclusive communities and to become leaders motivated to contribute to the common good.

Before joining Swarthmore, Chopp served as president of Colgate University, where she led a comprehensive strategic plan that expanded the university's academic space, strengthened academic programs, and developed new interdisciplinary centers. She also served as provost and executive vice president for academic affairs at Emory University and as a dean at Yale University.

Chopp is a widely published author and editor. Her six books include Remaking College: Innovation and the Liberal Arts (2013), which she co-edited with Haverford College President Dan Weiss. Her other notable publications are The Praxis of Suffering: An Interpretation of Liberation and Political Theologies (1986) and The Power to Speak: Feminism, Language, God (1989). She has published more than 50 articles.

Chopp serves on the governing board of the Association of American Colleges and Universities and is the immediate past chair of the Centennial Conference President's Council. Previously, she was on the board of the National Survey of Student Engagement. Chopp has also served as a member of the executive committee of the Annapolis Group and the Board of Trustees of the Carnegie Foundation for Teaching and president of the American Academy of Religion.

A native of Kansas, Chopp received a B.A. from Kansas Wesleyan University, a M.Div. from St. Paul School of Theology, and a Ph.D. from the University of Chicago. Each of her alma maters has honored her with distinguished awards, and she has received six honorary doctorates from other colleges and universities.

Chopp is married to Frederick Thibodeau. They have three sons, one living in Colorado, as well as other family who also reside in the state.

Chopp is a former member of the IAALS Board of Advisors.