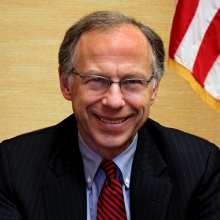 Thomas A. Balmer has served as Chief Justice of the Oregon Supreme Court since May 1, 2012, and as a member of that court since 2001. Prior to his appointment, he was in private practice in Portland from 1982-93 and 1997-2001, including serving as managing partner of Ater Wynne LLP. He was Deputy Attorney General of Oregon (1993-1997), served as a Trial Attorney with the Antitrust Division of the U.S. Dept. of Justice (1979-80), and practiced with firms in Boston and Washington, D.C. As a lawyer in private practice, Chief Justice Balmer represented individuals and businesses in a variety of civil disputes, including antitrust, intellectual property, employment, energy, and other commercial cases. As Deputy Attorney General, he advised the Attorney General, the Governor, and other officials on constitutional, election, and administrative law matters, and represented the state in trial and appellate courts, including argument before the U.S. Supreme Court.

Chief Justice Balmer currently serves as the Chair of the Conference of Chief Justices (CCJ) Civil Justice Improvements Committee and a board member of CCJ. He has also served on numerous law-related boards, including the Visiting Committee of the University of Chicago Law School, Classroom Law Project, Multnomah County Legal Aid Service, and the Advisory Committee of the Campaign for Equal Justice. He is a frequent speaker and author, and his articles on antitrust, legal history, and constitutional law have been widely cited, including by the U.S. Supreme Court and many lower federal and state courts. Chief Justice Balmer has participated in various international legal programs, including lecturing on judicial ethics in Tashkent, Uzbekistan (under the auspices of the United Nations); working with judges and schools on law-related education in Zagreb, Croatia; and speaking to judges and court administrators through the Russian-American Rule of Law Consortium.

Chief Justice Balmer is a graduate of Oberlin College and the University of Chicago Law School. He is married to Mary Louise McClintock, director of education programs for the Oregon Community Foundation, and they have two adult children.