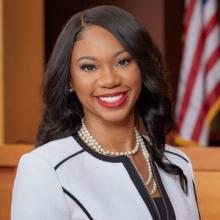 Yolanda Lewis is the District Court Administrator for the Atlanta Judicial Circuit and the Superior Court of Fulton County, the largest and busiest court system in the State of Georgia. Prior to joining the Atlanta Judicial Circuit, Lewis served as the Court Administrator for Clayton County’s Superior and State Court, and is the former Assistant Director of Judicial Liaison for the Administrative Office of the Courts. During her eighteen year career in criminal justice and judicial administration, she has provided broad-scale executive level recommendations, strategic direction, training, financial management, alternative sentencing solutions, and legislative support to members of the judiciary, which include more than 1,700 judges and 1,100 across courts in Georgia.

Lewis, who is characterized as a focused and performance driven Administrator, has worked to leverage innovation with efficiency during her court management career. She is credited for planning the first Georgia Victims Assistance Academy, developing a statewide Judicial Stratification Project to identify jurisdictional needs for additional court resources, created the first Regional Justice Technology Expo, and the first Regional Mental Health and Justice Symposium. Additionally, she has been appointed to manage or serve on multiple committees commissioned by the Chief Justice of the Supreme Court. She has created two award winning court programs, one of which received national recognition as a benchmark for access to justice. The Lewis-led “Fulton County Justice and Mental Health Task Force” initiative developed seven new best-practice programs to reform the way mental health impacts the criminal justice system in Georgia’s capital. Lewis is also the host and Executive Producer of the television program “Fulton Justice," a court related talk show dedicated to providing resources, information, and a closer look at how the Atlanta court system operates.

Lewis is a native of Alabama and holds a Bachelors of Arts in Criminal Justice and a Master’s in Public Administration and Intergovernmental Affairs from the University of South Alabama. She is the former Large Court Director, Board member, and Vice President of the National Association for Court Management, and is the Past President of the Georgia Council of Court Administrators. Lewis serves as the Administrator of the Georgia Council of Superior Court Judges Special Committee on Mental Health. Lewis also serves as the Chair of the Judicial Tool Workgroup for the national Joint Technology Committee and is a graduate of the 2016 Class of Leadership Atlanta. Lewis is a certified Court Manager by Michigan State University and the Institute for Court Management, a graduate of Leadership Clayton and the Atlanta Institute for Diversity Management. She is also a member of the National Association of Public Administrators, the Georgia Association of Black Women Attorneys, and has been honored with a National Service Award under the presidency of William “Bill” Clinton for her work with displaced Americans affected by HIV and Aids. Lewis also the founder of a consulting firm that specializes in leadership for professionals in the public and non-profit sectors.