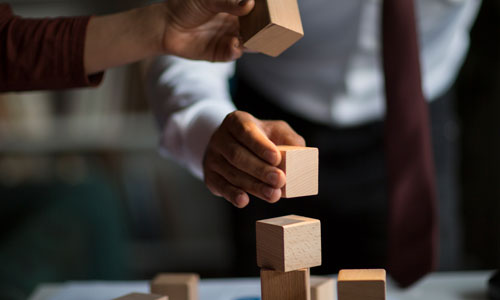 Last October, IAALS published the groundbreaking report Building a Better Bar: The Twelve Building Blocks of Minimum Competence, containing clear, evidence-based recommendations and guideposts for improving the bar exam and lawyer licensing. At the core of the recommendations is an empirically based definition of the minimum competence needed to practice law—something the legal profession has never had and the bar exam has never tested for.

To form this definition, we held focus groups consisting of both junior lawyers (“new lawyers”) and lawyers who had directly supervised at least one junior lawyer during the two years preceding the study. We facilitated 50 focus group sessions across 12 states—including 12 specialized groups for which participants were exclusively women, people of color, rural lawyers, and solo practitioners to ensure we gathered a well-rounded view of new lawyers’ experiences.

Ultimately, minimum competence consists of 12 interlocking “building blocks,” which reveal not only what it takes to be a minimally competent lawyer, but how current licensing systems must be improved to reflect what new lawyers—and those they work with—say they actually do in practice.

Building Block #1:  The ability to act professionally and in accordance with the rules of professional conduct.

Within our focus groups, new lawyers clearly took their professional responsibility seriously—some even noted it as the most important subject tested during the licensing process. However, new lawyers had trouble putting the rules of professional conduct into action, despite having studied them in law school and for the bar exam. They related it was hard to recognize ethical issues in the moment, as well as to balance the need to advocate for one’s client with the need to comply with all rules.

“Focus group members suggested that professional conduct was a ‘learned skill’ rather than a set of blackletter rules. Without more experience practicing that skill, some newly licensed lawyers made mistakes.”

From revealing a client’s bottom line to a mediator without obtaining the client’s authority to waiving privilege for client documents without thinking through the ramifications, focus group members shared numerous stories of times they’d failed to identify ethical issues in the moment. And this struggle to apply the rules of professional conduct in practice was not limited to their own actions—new lawyers were uncertain as to how to deal with unethical or unprofessional behavior in others, as well.

Supervisors concurred that professionalism and adherence to the Rules of Professional Conduct are important, but they had different areas of concern than new lawyers. They expressed concern about new lawyers lacking commitment and not understanding their role in a team environment.

Building Block #2: An understanding of legal processes and sources of law.

New lawyers admitted that, even after completing law school and passing the bar exam, they still lacked a basic understanding of key legal processes—and, in fact, law school and the bar exam may have warped their view of which type of law they’d encounter most often in actual practice. They often greatly overestimated the precedence of federal law, while overlooking state and local laws. They also lacked a basic understanding of administrative and legislative processes, arbitration and mediation, and processes related to transactions.

“What I really needed to learn was the procedure, specifically California procedure, which my  school had no interest in teaching me.”

In fact, ninety percent of all new lawyers in our focus groups worked at least some of the time with state and local laws, which meant they had to flip-flop their view of the legal system—and until they did, they were bound to make mistakes. One supervisor related how he’d learned to watch out for this issue, specifically, to ensure new lawyers didn’t jeopardize clients’ cases.

Therefore, new lawyers, rather than coming armed with knowledge of specific state or local rules, simply need to enter practice with an understanding of the importance of these laws and their accompanying judicial systems.

Building Block #3: An understanding of threshold concepts in many subjects.

Over and over, focus group participants emphasized how important it was that new lawyers not rely on memorized rules during their first year of practice.

“They believed that memorization was ‘dangerous’ and ‘borderline malpractice.’ Rather than  rely on memory, they urged, new lawyers should use their basic knowledge of doctrinal  concepts to identify issues and research specific rules.”

This “basic knowledge” that focus group participants referred to can also be thought of as a “threshold concept,” a term used by cognitive scientists to describe an insight that transforms the understanding of a subject—when a new learner understands the how and why of a subject rather than merely the what. Examples of threshold concepts in law include jurisdiction and the principle that evidentiary rules disfavor the use of character evidence at trial, among many others.

The current bar exam may have affected new lawyers’ ability to grasp these vital threshold concepts, due to its emphasis on the memorization of detailed rules. However, new lawyers are more likely to succeed if they enter their first year of practice understanding the principles and policies that govern the law, rather than having a set of black-letter rules memorized. “Rules differ from jurisdiction to jurisdiction as well as over time; threshold concepts allow lawyers to identify issues, search for the appropriate rule, and see nuances in the rule. As one new lawyer explained, these concepts reveal ‘what makes that area of law tick.’”

Being a competent lawyer requires far more than having a slew of rules memorized—it takes the ability to understand why those rules are in place, as well as the ability to recognize them and put them into action. Our licensing system needs to reflect the necessity of these abilities, and ensure that new lawyers are entering into practice equipped with the right combination of knowledge and skills to effectively serve their clients and facilitate justice. These first three building blocks are just the start, and soon we’ll be diving into the next three building blocks of minimum competence.

Our full findings and recommendations, including the 12 building blocks of minimum competence, our 5 insights for assessment, and our 10 recommendations for better licensing, can be found here.