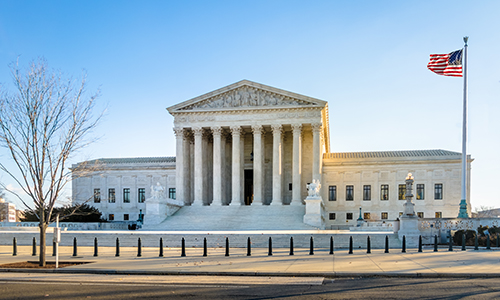 On the final day of 2019, U.S. Supreme Court Chief Justice John Roberts issued his annual year-end report on the federal judiciary. In the report, he stresses the importance of civic education to ensure public trust and confidence in our country’s legal system.

“[W]e have come to take democracy for granted, and civic education has fallen by the wayside,” he writes. “In our age, when social media can instantly spread rumor and false information on a grand scale, the public’s need to understand our government and the protections it provides is ever more vital.”

Concise and understandable written opinions by judges explaining their decisions are one way that courts try to advance the public’s understanding of the law—and overall accessibility and transparency. By posting opinions online, he says, the public has “instant access to the reasoning behind the judgments that affect their lives.”

But he encourages more formal civic education efforts at both federal and state levels, such as the Administrative Office of the U.S. Courts’ online programs and curriculum materials on teen-relevant topics, as well as the Federal Judicial Center’s online educational resources for the general public (like the “Court Shorts” video series). There’s also the Civil Discourse and Difficult Decisions program, which aims to provide students with the skills necessary—in both a courtroom and everyday life—to respectfully settle disputes.

Chief Justice Roberts also cites many ways that the federal judiciary has created spaces in its courts for citizens to come and learn about the history of the judiciary and the Constitution, and he notes that state courts, too, have taken up the mantle of empowering citizens to participate in democratic processes. We have several examples here in Colorado.  Our Courts Colorado is a nonpartisan program that provides adult civic education presentations in English and Spanish in communities statewide. The Ralph L. Carr Colorado Judicial Center, home to the Colorado Supreme Court and Colorado Court of Appeals, also houses a 4,000-square-foot Learning Center that is open to the public, free, and full of interactive, fun, and informative exhibits. The Sandra Day O’Connor Institute’s Camp O’Connor, a middle-school summer program that aims to inspire our next generation of leaders while steeping them in civic education, will have its first Colorado session this June at the University of Denver Sturm College of Law.

Such efforts, Chief Justice Roberts contends, are crucial to informing and empowering the public as to our country’s history and its democratic processes, which in turn will sustain their confidence in a judiciary that carries out its constitutional duties. “Each generation has an obligation to pass on to the next, not only a fully functioning government responsive to the needs of the people, but the tools to understand and improve it.”

The Chief Justice concludes the report with a call to action:

“As the New Year begins, and we turn to the tasks before us, we should each resolve to do our best to maintain the public’s trust that we are faithfully discharging our solemn obligation to equal justice under the law.”