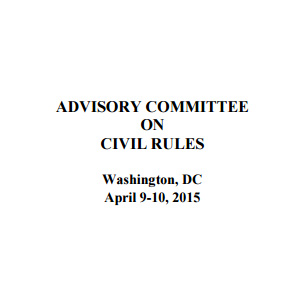 The 640-page Agenda Book reflects the broad range of matters currently being tackled by the federal Civil Rules Advisory Committee, which met in Washington, D.C., on April 9. Issues include the proposed rule amendments currently before the Supreme Court, the development of federal pilot projects, and a multitude of topics in-between. The Committee continues to await approval of the proposed amendments from the Supreme Court, which has until May 1, 2015, to consider the proposals and officially promulgate the revised rules.

The Rules Committee discussed future federal pilot projects and formed a subcommittee to look at state and federal examples and consider what pilot projects would be of benefit to the federal courts. The discussion recognized that pilot projects provide a powerful way to change norms, while also providing data to support future reforms.