Constitution Day 2022: From Establishing Justice to Realizing it for All 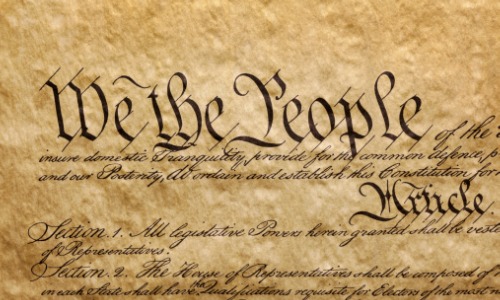 Over two hundred years ago, on September 17, 1787, members of the Constitutional Convention signed the United States Constitution. Each year on this day, we celebrate Constitution Day and the establishment of our government and the guarantee of our rights.

The preamble to the Constitution begins with the important first words: “We the people of the United States, in order to form a more perfect union, establish justice…” It is the first of the five objectives outlined by the framers for our government—and for our way of life as a nation.

The establishment of justice—and the rule of law—affects every aspect of our daily lives. When realized, the rule of law ensures that government and individuals are accountable under the law, that law is justly applied, that we have open government, and that justice is accessible and impartial. On this foundation, individuals, communities, and businesses can thrive.

Unfortunately, the opposite is true as well. Where the rule of law falters so too do people, communities, and businesses. We know that not everyone experiences justice and the rule of law in the same way in the United States. IAALS and HiiL, The Hague Institute for Innovation of Law, conducted a US Justice Needs study that found that, on an annual basis, 55 million Americans experience 260 million legal problems. From their perspective, 120 million of those legal problems are not resolved fairly every year. According to the World Justice Project Rule of Law Index, in 2021 the United States ranks 126 out of 139 countries for accessibility to court and legal services. The impact on people’s lives extends beyond traditional measures of winning or losing a legal action. People endure stress, negative impacts on mental health, loss of money, and negative impacts on their overall financial well-being. The impact is not limited to the individual, spreading to families, neighbors, employers, and communities.

Equal access to justice for all is foundational to the rule of law and is a basic requirement in our society. Yet the US Justice Needs study highlighted that the effects of the justice crisis are not equally distributed. The nature, seriousness, and resolution rates of the problems Americans experience are shaped in meaningful ways by their income, gender, race and ethnicity, age, and living environment. As to whether civil justice is free of discrimination, the WJP Index ranked the United States 122 out of 139 countries. Given the state of access to justice in the United States, it is not surprising that public trust and confidence in the system is declining, that many people perceive racial and gender bias and socioeconomic bias within the system, that they have concerns over the role of politics in judicial decision making, and that they do not think the justice system is fair or impartial.

While the research highlights the critical issues of inequity in the United States justice system, it also provides us a path forward. To change the status quo, we first need to own it. We need to recognize the current state of justice in the United States and have a relentless sense of urgency in our work to address this crisis. Then we need to take the critical—and difficult—next step to address this crisis in an evidence-based, people-centered way, so that justice and the rule of law is realized by all. We need long-term strategies to scale innovative and scalable solutions, including streamlined and modernized court services and processes; opportunities for more people and organizations to provide high-quality legal services at affordable prices; and improvements along the entire pipeline—from legal education to the profession—that ensures a diverse profession primed to help others solve their legal problems. IAALS is dedicated to this work and is inspired by the innovation we already see happening around the country.

It was the founders’ vision that we establish a more perfect union, with justice first and foremost in achieving that goal. It remains foundational today. To achieve it, we must rebuild our justice system to ensure that people’s needs are realized in an accessible, fair, equitable, and accountable way.