On Constitution Day, Some Perspectives on the Rule of Law and an Independent Judiciary 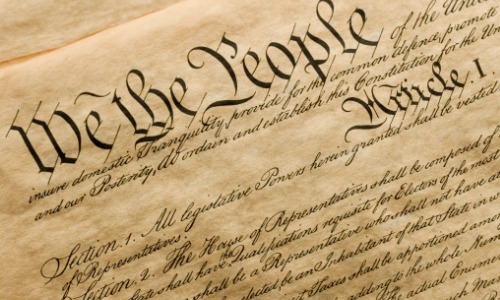 September 17 marks Constitution Day, a day to commemorate the signing of the U.S. Constitution—undoubtedly the most influential document in American history—in 1787. In order to celebrate, IAALS is looking back on a series of perspectives we published in 2016, authored by members of our O'Connor Advisory Committee. Comprised of leaders across our government, judiciary, and legal profession, the group of authors share their wisdom and experience, grounded in a belief that an independent judiciary is crucial to both the rule of law and the functioning of our democratic republic.

Arizona Supreme Court Chief Justice Ruth McGregor (Ret.), discusses the concepts embodied in the phrase rule of law, calling them “both simple and complex.” The judicial branch, she explains, is responsible for assuring that all persons receive the full benefits of the rule of law; in order to do this, we must assure that judges are independent, impartial, and qualified for the job, and we must guarantee that courts are available to all for the fair resolution of their disputes. In that vein, she expresses concern over attempts to politicize the judicial branch, as well as our ability to keep courts accessible to those who need “fair, impartial, and speedy” resolution of disputes—disputes related to the most important parts of their lives. She writes:

“Our Founders envisioned a judicial system separate from the political branches of government, a system designed to fulfill the promise that this country would provide a government based on the rule of law. On this Constitution Day, as on every day, we all are responsible for ensuring the continued viability of that vision.”

Keith Swisher, Professor of Legal Ethics at the University of Arizona James E. Rogers College of Law, discussed the gift of judicial independence and how “[t]his protective environment (or in other words, independence) enables judges to decide our cases and controversies according to the facts and law, including our constitutional rights—not according to special interests or powerful majorities. This independence has supported our judges in protecting some of the least powerful and most oppressed individuals and groups who come before our courts.”

H. Thomas Wells, Jr., Past President of the American Bar Association, recalls attending the 800th Anniversary of the sealing of the Magna Carta—a document which greatly influenced the U.S. Constitution. “Our Constitution is an enduring document protecting our rights and liberties. But it derived many of its provisions from the ideas of a group of rebellious English barons who imposed them on King John of England,” Wells writes. “Due to Magna Carta and the U.S. Constitution, we live in a society where the rule of law dominates over the ‘law of the ruler.’”

Meryl Justin Chertoff, Executive Director of the Georgetown Program on State and Local Government Policy and Law, cautions as to how easily the rule of law might be lost. She references the corruption that campaign donations can foster—an issue on both sides of the party line—and offers her thoughts as to how this pressing issue may be addressed.

Rebecca Love Kourlis, Founding Executive Director of IAALS, reflects on the importance of having public trust in our courts—and the dire situation we will find ourselves in should that trust be lost. “In one respect, the Constitution is like the rebar embedded in the concrete that supports our houses, buildings, skyscrapers, and bridges. It is unseen, but critical to the strength of the structure. So, too, our Constitution is fused into the heartbeat of our economy, our democracy, and our court system. Without it, we could not do business, pass laws, create rules of interaction with one another, or transfer power peacefully.”

She also reminds us that the courts are not meant to adhere to public sentiment, but rather be—above all—fair and impartial. “Remember, on this Constitution Day, what the Framers fought for and drafted into our enabling document—a land where no power would ever be overly concentrated, where the courts would stand apart from the political fray, and where we could aspire to equal justice for all.”

Christine Todd Whitman, Former Governor of New Jersey, shares her unique perspective as an individual whose entire career had been spent not in the judicial branch, but in the executive branch. She, too, stresses “the importance of having a judicial system that can operate in a fair and impartial way, insulated from partisan political pressures.”

“So, as September 17 comes and goes, let us remember that our Constitution asks of us a capacity to remember that power concentrated in one or two branches of government is never a good thing. The three branches of government must all be strong, and the courts actually have a constitutionally mandated duty to measure the acts of the legislature and the executive against the law, not against political will.”

The full blog series can be found here.