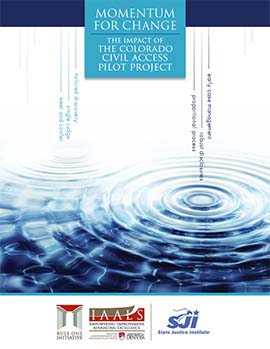 Denver, Colo. – IAALS, the Institute for the Advancement of the American Legal System at the University of Denver, announces the release of our final findings on Colorado's experiment with new court procedures intended to secure the fundamental promise of our civil justice system: a just, speedy, and inexpensive determination of every action. Momentum to improve the process has been building on a national scale, and Colorado is among the first states to take action.

“The impetus behind the new rules was our growing awareness and concern that the prohibitive costs and delays of civil litigation were foreclosing access to the judicial system,” said Judge Ann B. Frick, a leader on these issues from the project's beginning. The IAALS report, Momentum for Change: The Impact of the Colorado Civil Access Pilot Project, outlines the results of Colorado's effort to address those issues, based on two years of data collection and empirical evaluation. “I am grateful for the enthusiastic participation by the bench and bar in the project.”

The Colorado Civil Access Pilot Project (CAPP) was developed by a balanced committee of plaintiff and defense lawyers, as well as bar leaders. Beginning in 2012, five state district courts began testing the new pretrial procedures for pleading, disclosure, discovery, and case management in business cases. Attorney Skip Netzorg, who was involved from the project's inception and continues to be active on committees locally and nationally, explained: “Instead of tinkering around the edges of the current system, CAPP presents a different way to litigate—by getting the judge and the parties focused on the core issues at an early point. Under CAPP, the process is tailored proportionately to the specific dispute, changing the discovery default from 'all you can eat' to 'you get what you need.'”

IAALS undertook the evaluation at the request of the Colorado Supreme Court. As a whole, CAPP has succeeded in achieving many of its intended effects:

The research also highlights a number of persistent challenges in creating new rules, including determining the appropriate basis for differentiating cases, the logistics of how each part of the process relates to the other aspects, and issues of compliance and enforcement.

“As a judge who was part of the CAPP effort, my experience in applying the CAPP rules to real-life cases with real-life issues is reflected in this report,” said Judge Robert L. McGahey of the 2nd Judicial District Court in Denver. “As I worked through those cases, I found that, generally, CAPP works like it's supposed to. I spent more time on face-to-face meetings with lawyers and pro se parties, which I consider a positive. There were some hiccups along the way but none so great that I ever threw up my hands and surrendered, and I found myself applying CAPP principles and ideas to all my cases. While there are parts of CAPP that need tweaking, the core goals of the project—fairness, keeping costs under control, and quicker resolution of cases—appear to have been met.”

Overall, IAALS' evaluation provides a rich source of information and answers the national call for robust empirical data on proposed reforms. Pilot projects and rules changes for civil cases are being implemented all over the country in both state and federal courts. As evaluations of these projects continue to roll in, they provide decision-makers striving to improve the legal process with concrete information upon which to base permanent rules changes or other pilot projects.

Correction: The original press release indicated that the CAPP rules increase the probability of an earlier resolution by 89% over the standard procedure; that percentage refers to settled cases. The accurate figure for all cases is 69%. 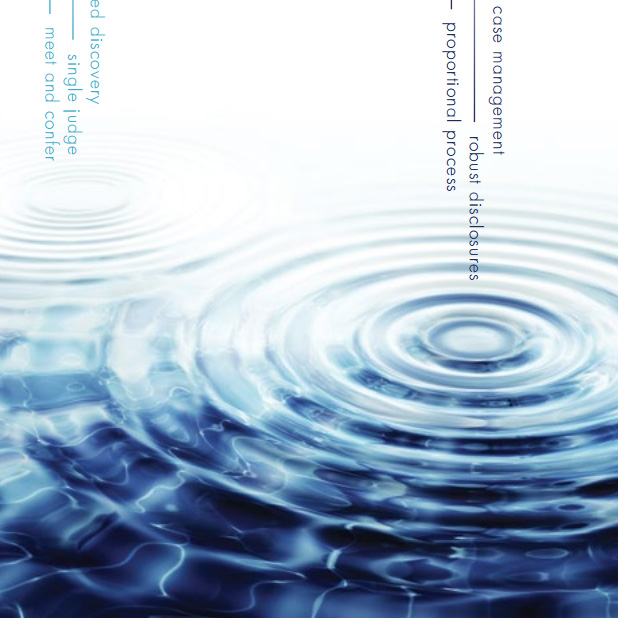