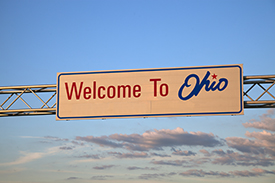 A federal judge has upheld the unusual system that Ohio uses to elect its judges, which features partisan primary elections and a nonpartisan general election.

The challenge to the Ohio system was first filed in 2010 by the Ohio Democratic Party, three judicial candidates, and a public employees union, who claimed that not allowing judicial candidates to run with party labels violated their First Amendment rights. The plaintiffs also noted a high level of voter rolloff for judicial races in the general election, which could be attributable to the absence of this information on the ballot. In response, the state pointed out that the political parties provide voters with partisan information about candidates through communications like sample ballots and slate cards. In rejecting this challenge, the judge questioned whether Ohio's judicial election structure was good public policy but cited the state's broad authority to regulate elections.

In 2013, Ohio Chief Justice Maureen O'Connor announced an eight-point plan to improve the state's process for electing judges and invited public discussion of the proposals on a website, Ohio Courts 2013. Last month, based in part on this feedback, O'Connor announced that she had narrowed her reform agenda to three initiatives: moving judicial elections to the top of the ballot in off-years, improving voter education about judicial candidates, and enhancing qualifications for serving as a judge. One of the original eight reform proposals on which the public was strongly divided was the elimination of party labels for judges entirely. While some citizens believed that voters should have as much information as possible, others argued that party affiliation should have no place in choosing judges.

Twenty states use nonpartisan elections to choose at least some judges, but only two other states give political parties a role in nominating candidates, as Ohio does. In the Arizona counties where superior court judges are elected by voters, a system like Ohio's is used. In Michigan, supreme court candidates are nominated at party conventions and then compete in a nonpartisan general election.