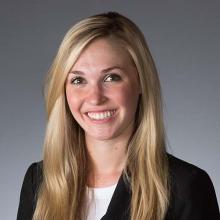 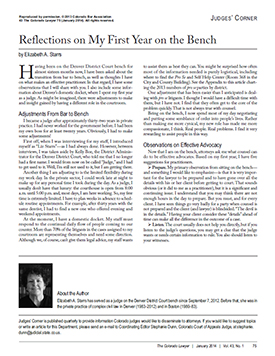 In a recent article in The Colorado Lawyer, Judge Elizabeth Starrs gives practitioners insight from the bench, including helpful practice tips and an explanation of the Denver domestic relations process. Many of her observations suggest the benefits of a structured, in-court process for domestic relations disputes, with an emphasis on decreasing the adversarial nature of the proceedings—an approach also advocated by the Honoring Families Initiative.

Of the parties that appeared before her in the last year, nearly 70% were self-represented, a statistic that is consistent with the experience of many family courts around the country. Since joining the bench in 2012, Judge Starrs has found working with self-represented litigants to be easier than expected, as much of the assistance they seek from the court is logistical rather than legal. In fact, Judge Starrs has found that self-represented litigants "often get to the core of the problem quickly. That is not always true with counsel."

On her domestic docket in Denver, Judge Starrs and her colleagues use several strategies to increase judicial efficiency, lessen stress on families, and encourage resolution outside of the courtroom. To begin, each case meets for an Initial Status Conference (ISC) to identify the issues in the case, areas of agreement and disagreement, and any stipulations. Denver County also recently adopted a voluntary Early Neutral Assessment (ENA) program, which can serve as an opportunity for early resolution of the case and protects the well-being of the family members involved, especially children. For cases proceeding from the ISC, the court generally must pre-approve whether there will be discovery and, if so, how much. Hearings on permanent orders typically last no more than a full day, and are scheduled between 92 and 120 days after a petition is filed.

Although Judge Starrs rotates out of the domestic docket this year, she has found the work greatly fulfilling: "Being on the bench, I now spend most of my day negotiating and putting some semblance of order into people's lives. Rather than making me more cynical, my new role has made me more compassionate, I think. Real people. Real problems."