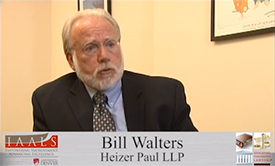 In his Voices from the Field interview, Bill Walters, Partner at Heizer Paul and former president of the Colorado Bar Association, suggests that law schools need to expose students to the various career options they have following law school, which extend far beyond the traditional big firm practice of law. For example, dual degree programs, like dual J.D./M.B.A. programs, allow law students to use the skills they've learned in combination with business skills to potentially and more successfully run a business after graduating.

As to better preparing law students for practice, Walters suggests that the first year curriculum should remain largely traditional through use of the Socratic method and fundamental courses. However, in the second and third year of law school, professors should use different pedagogical methods to teach students, like experiential course offerings. Walters also underscores the importance of having practicing attorneys teach students.

Finally, Walters advocates for integrating more professionalism and ethics into law school curriculum to help produce law school graduates that are better prepared for the practice of law and serving clients. He suggests that schools need exposure to these issues beyond the Rules of Professional Conduct. By “infusing” the curriculum with ethical issues, students can better understand the issues in the context of practice. Walters suggests that a student who attends a law school that emphasizes professionalism by modeling ethical behaviors will have an advantage interviewing with law firms and will increase the potential for the student to get hired.

Hear more of Bill Walters' suggestions for reforming legal education in his Voices from the Field interview below.

Voices from the Field