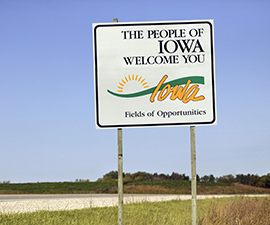 After reviewing the public comments, and making some changes in response, the Iowa Supreme Court has approved a new expedited civil action rule (ECA rule) and a package of new rules and amendments collectively referred to as “the discovery amendments.” The ECA rule applies to actions involving $75,000 or less in money damages. The rule includes limits on discovery and summary judgment motions, an expedited trial, and limitations on the length of trial. The discovery amendments include adoption of the federal initial disclosures scheme (with some modifications), limitations on the frequency and extent of discovery, a discovery plan, and an expert report requirement. These changes will take effect January 1, 2015.

The ECA rule and the discovery amendments stem from the work of the Iowa Civil Justice Reform Task Force, which issued its final report, "Reforming the Iowa Civil Justice System", in March 2012. Following issuance of the report, the supreme court appointed an Advisory Committee Concerning Certain Civil Justice Reform Task Force Recommendations, which has been working to implement the recommendations. As a first step, in December 2012, the Iowa Supreme Court established a three-year pilot project for an Iowa Business Specialty Court for complex cases. Cases are eligible to be heard in the Business Court Pilot Project if compensatory damages totaling $200,000 or more are alleged, or the claims seek primarily injunctive or declaratory relief. In addition, eligible cases must satisfy one or more of the criteria listed in the Memorandum of Operation issued by the Supreme Court.

Iowa now seeks to “significantly reduce litigation time and cost, while increasing access to justice,” by adopting the ECA rule applicable to cases where $75,000 or less is alleged. In addition, regarding the discovery amendments, “the court believes that having the parties exchange basic information that is typically provided later in discovery anyway will lead to more cost-effective and efficient litigation.” It is also the hope that the amendments regarding experts and various other updates will help “curb potential abuse of discovery practices.”