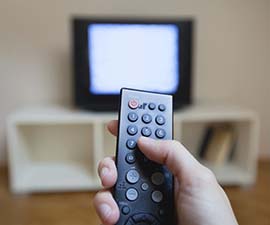 A new study from the American Constitution Society finds a correlation between the airing of TV ads in state supreme court races and justices' decisions in criminal cases.

According to Skewed Justice: Citizens United, Television Advertising and State Supreme Court Justices' Decisions in Criminal Cases, the more ads that air in a state, the more likely justices on the state's high court are to vote against criminal defendants. This relationship between campaign ads and votes in criminal cases is stronger for Republican justices than for Democratic or Independent justices.

The ACS study examines TV ads and published opinions in criminal appeals in 32 states with supreme court elections from 2008 to 2013, with criminal appeals limited to cases involving murder, robbery, violent aggravated assault, and rape and other sex crimes.

The study also documents a relationship between state supreme court justices' decisions in criminal cases and the U.S. Supreme Court's 2010 decision in Citizens United v. Federal Election Commission. In Citizens United, the Court struck down bans on corporate and union spending in elections in 23 states. Independent expenditures in state supreme court elections nearly doubled in the wake of that ruling, and according to Skewed Justice, jurists in the affected states became more likely to vote against criminal defendants.

In addition, as independent spending has skyrocketed in the aftermath of Citizens United, the tone of TV ads in supreme court races has grown increasingly harsh. In 2012, more than 44 percent of ads funded by outside groups were attack ads. One of the most common charges leveled against justices in such ads is that they are “soft on crime.” Groups who opposed the retention of three Tennessee justices in August employed this tactic, despite the fact that the Tennessee Supreme Court has upheld 90 percent of death sentences during their tenure. In other recent high court races, incumbent justices have been described as fighting to protect sexual predators, coddling child molesters, and being sympathetic to rapists.

This trend is expected to continue in the lead-up to November's state supreme court elections, with sitting justices on the ballot in Kansas, Illinois, Oklahoma, and North Carolina already coming under fire for their decisions in criminal cases.