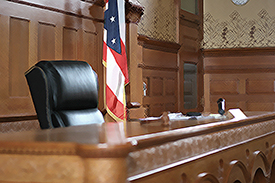 Recent national media coverage—Filibuster Weakened, Senate OK'ing Judges Faster; Obama's Shocking Success on Judgeships Overturns Conventional Wisdom; Obama Leaves His Mark on the Federal Bench—paints a highly positive picture of the current pace of federal judicial nominations and confirmations. After all, 2014 has seen 50 confirmations so far, compared to 43 in all of 2013 and 48 in 2012.

Not so fast, says Russell Wheeler, an IAALS Board Member and Visiting Fellow at the Brookings Institution. The outlook has improved, but according to Wheeler, a case can be made for a more cautious assessment.

For one thing, President Obama faces more judicial vacancies than did President George W. Bush at this point in his second term, and those vacancies will be far more difficult to fill if Republicans win the Senate in November. Second, many longstanding vacancies have no nominees. Forty-one vacancies announced or created at least six months ago have no nominees. Wheeler noted blame-gaming between home-state senators, who have the power to effectively veto nominees, and the White House.

Finally, the length of time between nomination and confirmation has increased from Obama's first to second term.

It is also worth noting that the federal judicial vacancy situation in some states is more dire than in others. Texas, for example, has 52 district court judgeships, eight of which are currently vacant and two more which are expected to open up next year. That would leave one in five seats on the state's federal trial bench empty (not to mention two vacancies on the U.S. Court of Appeals for the Fifth Circuit, once announced last year, the other in 2012). According to U.S. District Judge Royal Furgeson (Ret.), "[t]he matter has reached a crisis point and must be addressed." Judge Furgeson, by the way, left active status during the Bush administration and has still not been replaced.