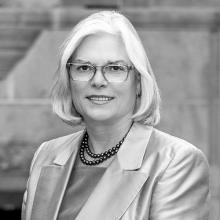 Karen Mathis served as Associate Executive Director and Chief Operating Officer at IAALS from 2012-2018, overseeing the operations side of the organization.

Mathis practiced as a business, commercial, and estate planning lawyer for more than 35 years. Before joining IAALS as its Associate Executive Director, she served on IAALS’ Board of Advisors from its founding in 2006.

Mathis was the third woman to serve as President of the American Bar Association, the largest voluntary organization of lawyers in the world.

While on sabbatical from her law practice, Mathis served as the Executive Director of the Central European and Eurasian Legal Initiative (CEELI) Institute in Prague from 2008-2009. Mathis also served as CEO of Big Brothers Big Sisters of America from 2009-2012.