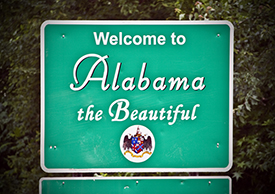 Last week, the Alabama legislature passed a new law that addresses judicial disqualification in cases involving campaign contributors. The state is an ideal target for recusal reform. From 2000-2009, Alabama ranked first in the nation in campaign fundraising and spending for state supreme court races. The 2006 cycle alone saw $14.5 million in contributions and expenditures.

Alabama imposes no limits on campaign contributions to judges.

The new law calls for judges to recuse themselves if a reasonable person would believe a campaign contribution impairs a judge's impartiality or if the donation creates a "serious, objective probability of actual bias." Other states have similar standards.

But the Alabama law goes further and creates a "rebuttable presumption" that judicial recusal is required based on the proportion of campaign support in the most recent election cycle a judge received from a party before the court. The presumption applies when, at the time the contribution was made, it was foreseeable that the party's case could come before the judge. "Party" includes a party to the case, an attorney on the case, or the attorney's law firm. For appellate judges, the presumption kicks in when a party has provided at least 10 percent of a judge or justice's support. (The minimum percentage is 15 percent for circuit court judges and 25 percent for district court judges.)