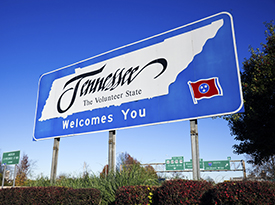 Speaker of the Senate and Lieutenant Governor Ron Ramsey, a Republican, is leading the charge against three supreme court justices standing for retention in August. (All appellate judges in Tennessee stand for retention at the same time every eight years, but two justices on the five-member court are retiring this summer.)

A strategy document prepared by Ramsey's office and obtained by media outlets suggests that the justices be portrayed as "soft on crime" and anti-business in the opposition campaign.

Ramsey is working with the Republican State Leadership Committee to attract business leaders, and their financial support, to the anti-retention cause. The RSLC recently formed the Judicial Fairness Initiative to back the election of state judges with conservative ideologies. The Koch brothers are among those being courted to participate in the campaign.

A former appeals court judge and prominent Republican lawyer worries about the anti-retention effort attracting out-of-state groups and independent spending, similar to what was seen in Iowa in 2010, and about the possibility that the supreme court will be for sale to the highest bidder. According to Lew Conner, "this is an attack on the independence of the judicial system."

This would be the first serious challenge to the retention of a supreme court justice in nearly two decades. In 1996, Justice Penny White lost her bid for retention based on her participation in a decision that overturned a death sentence for a man convicted of the rape and murder of an elderly woman. The Tennessee Conservative Union, victim's rights advocates, and death penalty proponents led the anti-retention effort.

The August election is the first of two in 2014 impacting the judiciary. In November, voters will decide whether to adopt a modified federal process for selecting judges, with gubernatorial appointment, legislative confirmation, and retention elections. Supporters of the proposed constitutional amendment are concerned that the challenge to the three justices' retention could "muddy the waters" for selection reform.