Flipping the Switch on Legal Education 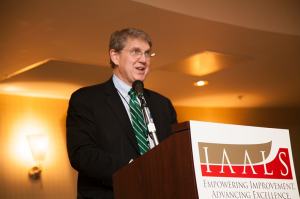 At our 2nd Annual Educating Tomorrow's Lawyers Conference, we honored Bill Henderson, Indiana University Maurer School of Law, with our Educating Tomorrow's Lawyers Award. Afterward, he delivered a keynote address (video below) focused on the significance of the role played by legal educators and the change that is coming. Talking about his own experience with a professor as a later-in-life college senior, he said that educators have the power to "flip the switch."

“He threw a switch in me. I was a different person after I had him. And I know I actually became a better person… a lot of his effect on me was beginning to think a lot less about myself and a little more about other people and wanting to make a difference… it was what he did. It wasn't what he said.”

He spoke also about Dan Chambliss at Hamilton College, who researched why undergraduates change majors and found that one of the biggest factors is that they have a brush with a great teacher. "A teacher that takes an interest in them, lights their imagination, and changes the trajectory of their lives."

As for how he approaches his own teaching, he said, "I'd like to throw another switch, like that switch was thrown in me."

His "flip the switch" analogy carried through to other themes he addressed, as well. He notes that economic conditions over the last several years have forced legal education reform issues to the forefront, making progress possible. He also talks about the need to effectively promote change within law schools and among those who may be resistant to it.

"It's implausible to be content with the current state of legal education. Our students are mired in debt—and this is all old news to everyone here. Employers are underwhelmed by the quality of skills of our graduates. Students can't find jobs—not enough of them, only a little bit more than 55% are falling into the vocation. And ordinary citizens can't afford lawyers. I mean, things are kind of a mess. So surely, there's got to be a better way to this."

He ends by talking about how real change will happen in legal education. Unfortunately, it's not as easy as flipping one giant switch, but it is about flipping the switch in individual educators one switch at a time. We can promote change, Henderson says, by building prototypes, inviting people to see them in action, and showing them how much fun we're having.

"U.S. legal education is on its way to becoming great. It's going to happen." But that's not saying it won't take a lot of work.