Job Placement for Law Grads: What US News Doesn't Take into Account

For the second year in a row, the U.S. News and World Report's 2015 law school rankings have taken advantage of the rich employment data now made public by the American Bar Association. Placement accounts for 20% of the USNWR rankings. Job outcomes, at 18% of the total rankings, are the bulk of that percentage (the remaining 2% goes to bar passage rate). But as the Economist noted last week, the rankings have not yet made use of an interesting piece of data the ABA has published: whether student jobs reported by schools were funded by law schools.

But so long as graduates put on these schemes are lumped in with those who found genuine paid work at law firms, the schools will in effect be buying themselves precious U.S. News ranking spots for a few million dollars a year. And applicants to law school who are considering taking on a six-figure debt will get a misleading picture of the job market.

According to the article, USNWR said it would consider excluding jobs funded by schools if it could be certain that it was not also excluding coveted positions that result in valuable employment outcomes.

Fair enough—even with all the data we now have, it can be difficult to discern the value of the jobs underlying the numbers. But in the meantime, if prospective students want to know whether a school's employment rate includes school-funded jobs, we want them to have easy access to that information. We developed Law Jobs: By the Numbers™ so they can pull all the employment data that matter to them—without having run their own complex calculations. For example, below are the results for the top ten schools (based on employment rates) when you filter for jobs based on "Bar Passage Required, Full-time, Long-term" and "Bar Passage Required, Full-time, Long-term, School-funded Excluded." Visit Law Jobs: By the Numbers™ to run the same numbers for the schools you're most interested in... or play with the other factors available to come up with your own unique list. 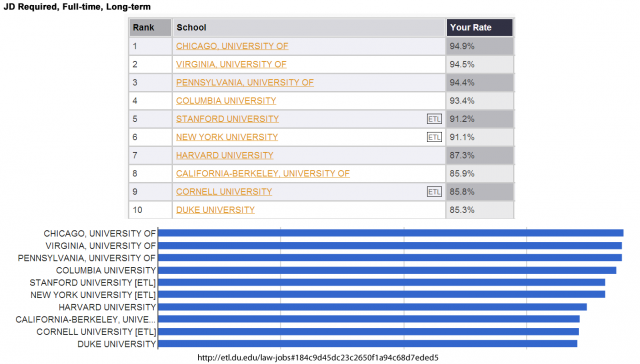 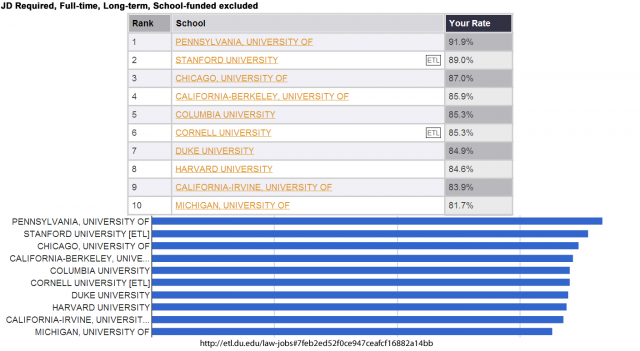