Law Day 2020: Strides Since the 19th Amendment, with Divides Still to Conquer 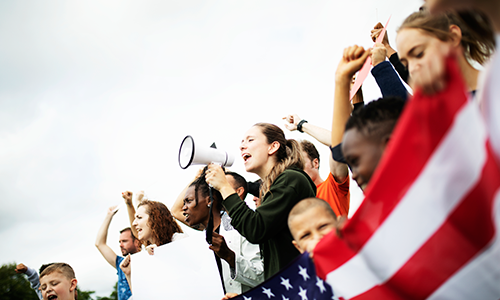 Law Day 2020 celebrates the centennial of the transformative amendment that gave women the right to vote. The women’s suffrage movement and victory won in the 19th Amendment changed the history of our country, empowering women with a voice and a right to participate in American democracy. The movement also served as a catalyst for other civil rights movements and constitutional reforms that have changed our legal landscape.

Yet as my colleague Janet Drobinske highlights in her piece, “Law Day 2020: Trailblazers to Guide Us and a Future to Inspire Us,” the women’s suffrage movement fought to claim equality in the right to vote, but it was not without internal inequality of its own. And 100 years after the ink has dried on the 19th Amendment, the reality that all women hold the right to vote has not translated to broader gender equality. This and related issues have been studied and documented in many societal contexts, and our justice system is not immune to claims of systemic inequality and bias.

Across studies, we find that black Americans (both women and men) are far more distrustful of the justice system than their white counterparts, and empirical research showing systemic racial bias in some case type outcomes suggests they have good right to be. Tulsa-based organization Still She Rises reports that, in the criminal justice system, the percentage of women in state prisons for drug offenses has doubled since 1986, with women being “particularly vulnerable to arrest and involvement in the criminal justice system because of the higher rates at which they experience trauma, substance abuse, and mental illness.”

Socioeconomic factors also continue to disadvantage women and other low- to middle-income people when they attempt to engage with the justice system. IAALS and others have studied the impacts of not being able to afford an attorney. Navigating the civil justice system without legal help can impact outcomes in critical matters like child custody, housing, and domestic violence. Poverty rates for women are higher than for men, according to the U.S. Census Bureau, and women can face additional issues that play into their civil and criminal legal needs. For example, the Legal Services Corporation finds that rates of intimate partner violence among people with family incomes at or below 100 percent of the Federal Poverty Guidelines (FPG) are about four times the rates of those with incomes above the FPG. Of these low-income domestic violence survivors—commonly women—overwhelmingly (97 percent) have at least one other civil legal problem that accompanies the domestic violence matter.

Inequality in how women experience the legal system is not just felt on the court user side. In a 2016 article, experienced plaintiff’s lawyer Elizabeth J. Cabraser asked: “Where are all the women in the courtroom?” Although Cabraser details a greater degree of diversity on the bench and in the defense bar (compared to the plaintiff’s bar), women continue to struggle here, also. A recent Brennan Center report detailing racial, ethnic, and gender diversity in state high courts found that women hold only 36 percent of state supreme court seats. Thirty-three states do not have a single female justice of color. The American Bar Association reports that women make up 38 percent of the legal profession. The ABA Commission on Women in the Profession also reports that women lawyers’ weekly salary as a percentage of male lawyers’ salary has fluctuated over the last decade but has never once in that timeframe risen to 90 percent or higher.

None of this is news, of course, at least not to women. Advocates and organizations are working on many levels to bridge existing inequality gaps. But as we celebrate the 19th Amendment this Law Day and applaud how far women have come, we do well not to forget how far we still have to go.