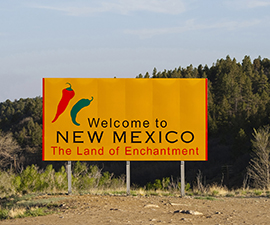 New Mexico judges are chosen through a process that is truly unique. Since 1988, judicial vacancies have been filled by commission-based appointment. Appointees then face a partisan election to keep their seats. At the conclusion of their terms, judges stand for retention for subsequent terms.

Typically, partisan primary elections determine who will represent the political parties on the general election ballot—unless incumbent judges wait until after the primary election filing deadline to retire. When that happens, party leaders choose judicial candidates.

This year, five judges waited until after the filing deadline to announce their retirement, exemplifying what some see as an increasing trend by judges and party leaders to try to influence judicial selections. Party leaders are also choosing candidates for four newly created judgeships. But in both instances, the parties have no obligation to slate the judges who have been chosen through a commission-based appointment process.

Earlier this month, the central committee for the state Democratic Party opted for someone besides a Democrat appointed in July to a district court judgeship in Sandoval County, selecting instead a candidate who had not applied to the judicial nominating commission for the position. The rejected judge filed a lawsuit first in the supreme court and then in the district court challenging the party's action. The judge's petition offers three alternatives: holding a runoff election between the judge and the party-selected candidate, placing the names of both on the ballot, or allowing the judge to serve until the next primary election.

A merit-selected judge in Bernalillo County also lost her bid to be the Democratic candidate in the upcoming election.

Observers, including a court of appeals judge and a leading newspaper, have called upon lawmakers to consider a better, more modern selection process—one that gives due weight to the judicial nominating commission's role in screening applicants and identifying the best qualified for appointment.

Each of the state's fifteen nominating commissions includes judges, lawyers, and non-lawyers who are appointed by other judges, the governor, legislative leaders, and the state bar president, and state law requires partisan balance among commission members. The commission screens and interviews judicial applicants and recommends at least two of the best qualified for appointment by the governor. The governor may request additional names, which the commission submits if a majority feels there are other well-qualified applicants. According to the Albuquerque Journal, the nominating commission's “vetting of candidates, without question, is a valuable procedure to ensure a position is filled by the best-qualified individual.”