On the very day when the Colorado Supreme Court Justices convened for an annual holiday luncheon, which includes all former Justices, a new Justice was added to the Court.

Former Chief Justices Bender and Mullarkey, former Justices Kirschbaum, Dubofsky, Hobbs, Martinez, Eid, and yours truly; and sitting Chief Justice Rice and Justices Hood, Boatright, Coats, Marquez, and Gabriel all met to share some holiday cheer and some Court administrative updates. The tradition has been ongoing since before I joined the Court—and it is a wonderful one. We all get a chance to catch up, and to feel part of an institution that is profound and meaningful. 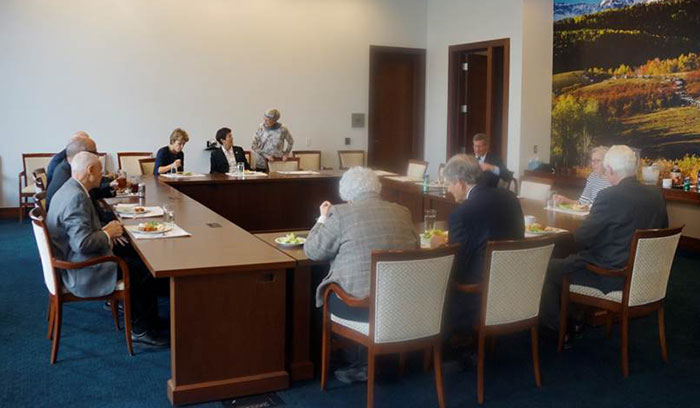 And, while we were doing that, Melissa Hart was gathering with her family in the Governor’s Office in preparation for the announcement of her appointment. The sitting members of the Court went over to the press conference.

I was struck by the orderliness and wisdom of our system of selection. Justice Eid was appointed to the 10th Circuit, and she transitioned there immediately after confirmation on November 2. The position was posted, and applications poured in to the Judicial Nominating Commission. The balanced Commission chose the individuals whom they wished to interview, went through the interviews, deliberated, and then submitted three names to the Governor. That Commission consists of 15 people with one lawyer and one non-lawyer from each congressional district and one additional non-lawyer. Non-lawyers are appointed by the governor. Lawyer members are appointed by joint action of the governor, attorney general, and chief justice.

Once the Commission submitted the names, the Governor had fifteen days to make his decision, during which he interviewed the nominees and collected information about them from the community. Then he made his decision, and the new Justice Hart will likely be sworn in fairly soon.

The whole process took about five weeks. It is as apolitical and fair as any process in the country. Consider the spectre of candidates Hart, Glenn, and Swift out on the campaign trail, raising money and rallying constituencies. Consider what that would do to their impartiality—both in appearance and in reality. We need to be grateful—to remember that ultimately the people on the bench need to be accountable to the law, and only the law.

The cadre of Justice and former Justices whom Justice Hart will join is a group of extraordinarily committed, intelligent, and high-integrity people. I am proud to have been one of them, and even prouder of the system that Colorado uses to select judges.