An Uncommon Dialogue: What Do We Want in Our Judges and How Do We Get There 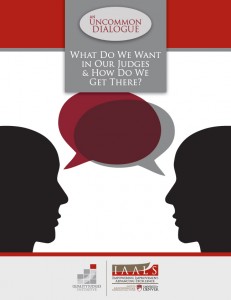 Part of what we do at IAALS is to convene people who have different viewpoints around a particular topic—in hopes that areas of consensus will emerge from the dialogue. We convened one such group at the Penrose House in Colorado Springs last spring. The subject was judicial selection and the attributes we want in our judges, and the participants were academics, a former Governor, judges who were elected, judges who were selected through an appointment and retention system, a Federal judge, and attorneys who served on nominating commissions or who advised governors or presidents. The gathering is captured in our newest publication, An Uncommon Dialogue: What Do We Want in Our Judges & How Do We Get There.

The group was ideologically and experientially diverse. Most of the invitees had previously expressed an opinion, either through published works or in public speeches, about the preferred system of selecting judges. Many of us had debated one another on the subject of appropriate judicial selection systems in the past.

We distributed no materials in advance, and organized the conversation only to the extent that we had a few formal presentations from panelists and broke into small groups on three occasions. Otherwise, the discussion was unstructured and free-flowing.

We did not begin by debating the pros and cons of different selection methods, but rather focused on a simple question: What are the most important characteristics or qualities of a judge? On that point, there was remarkable unanimity around the room. We all want our judges to be diligent, competent, impartial, and to have good judicial demeanor and a high level of integrity. When it comes to judicial decision-making philosophy, we want our judges to recognize that the primary job of a court is to decide the case before it; we want them to understand the impact or consequences of a decision but not allow those factors to drive the decision, and we want them to appreciate the stability in law and precedent, while recognizing the need for change.

That is a remarkable convergence. Here, we've found our starting point within the larger, raging debate about how to get quality judges onto the bench. The old adage about 'beginning with the end in mind' is a polestar here: if we all know where we want to go, then developing the pathways to get there becomes much more collaborative and constructive. Neither the proponents of election systems nor the proponents of appointment/retention systems want judges on the bench who have a political or ideological agenda. And, not surprisingly, everyone expressed concern that all of the systems, to some extent, embed a political component.

Clearly, the next conversation is how to develop and improve methods of selection in order to optimize the chances of getting the kind of judges on the bench that we were all describing. And, we can now begin that conversation from a point of consensus, which is an enormous step forward.