Creating a Court Compass for the Family Law System

Our courts face a crisis of access. In a majority of family cases—divorce or separation, and custody issues—at least one party is self-represented. In some courts, upwards of 80 to 90 percent of cases involve a self-represented party. Through narratives of those who represented themselves, the IAALS 2016 Cases Without Counsel study highlighted the ways in which people struggle trying to navigate their way through the family justice system without legal help. As expressed by one self-represented litigant:

“It felt very much like wandering through a room with no lights on, and you’d bump into something, you’d ask somebody about it, and they’d shine a little flashlight and say, ‘go that way.’…Nobody ever turned the lights on in the whole room to give us an idea of exactly what it should look like and how the process should look.” 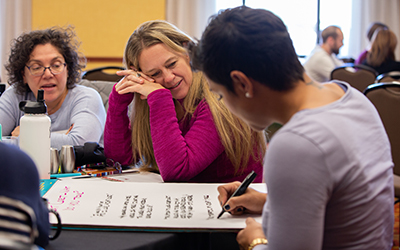 It is essential that self-represented litigants can navigate the process and know what to expect at key stages.

Building on our work in Cases Without Counsel, IAALS launched the Court Compass project to explore in more depth how the legal system could meet the needs of self-represented litigants in family court. Because technology can be leveraged to guide and empower self-represented litigants, IAALS created a maturity model for courts to assess the effectiveness of current tools for connecting with, and providing the services intended for, self-represented litigants. Applying that model to current court offerings around the country suggested that many tools were not as effective as they could be—in part because they were built to conform to the complex civil justice system, which was designed under the assumption that both parties will be represented by competent attorneys.

Court technology solutions, however, are only as helpful as the underlying court processes that they support. To make the process simpler for litigants, we must first simplify the process. And in order to do this, we needed litigants themselves to be part of this conversation. In speaking with jurisdictions across the country, we learned that courts are eager to simplify their processes to better serve self-represented litigants and are interested in engaging court users in this approach, but they do not know how to implement the crucial step of getting litigants to speak with them in the first place.

Partnering with experts around the country, IAALS developed Court Compass as a way to engage court users in brainstorming ways to simplify the family court process. We held user-centric design sprints where self-represented litigants and court stakeholders gathered to map out existing pain points in the process and prototype test solutions in real time. The sprints emphasized an evolving application of design thinking to produce a reimagined court process that includes revised or redesigned processes and services.

While the design sprint protocol was revised after each sprint based on participant feedback, the general protocol included guiding participants through a process of defining the pros and cons of the current divorce process, brainstorming potential improvements to the process, reviewing and ranking prototypes created that day and during the previous sprints, and developing and testing prototypes (either new or based on previous prototypes) tailored to the needs of self-represented litigants in family cases.

IAALS and its project partners conducted these sprints in diverse jurisdictions in Massachusetts, Iowa, North Carolina, and Colorado. Each design sprint was a resounding success in its own right, as IAALS was able to get a picture, informed by court users, of the various processes and services in the divorce/separation process that could be improved, and each participating state was armed with proposed solutions that its own self-represented litigants created with the help of court and legal system stakeholders. We are both grateful to have attended these design sprints and worked alongside litigants and court system stakeholders to develop meaningful solutions for the courts, for the legal system at large, and, most of all, for the everyday people who desperately need them.

Michael Houlberg and Zack DeMeola are Managers at the Institute for the Advancement of the American Legal System (IAALS). Zack managed the Court Compass project in 2017 and early 2018, and worked with IAALS consultants to develop the project and design sprints in the early stages of both. Michael is the current manager of Court Compass and has marshalled the project forward since April of 2018, including the creation of Redesigning Court Processes through User-Centric Design Sprints. 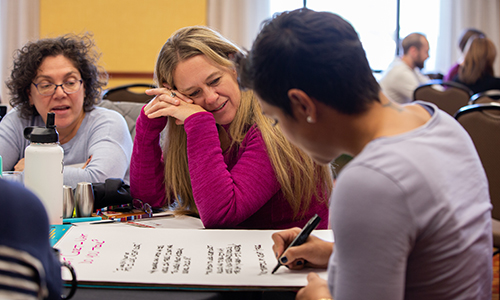