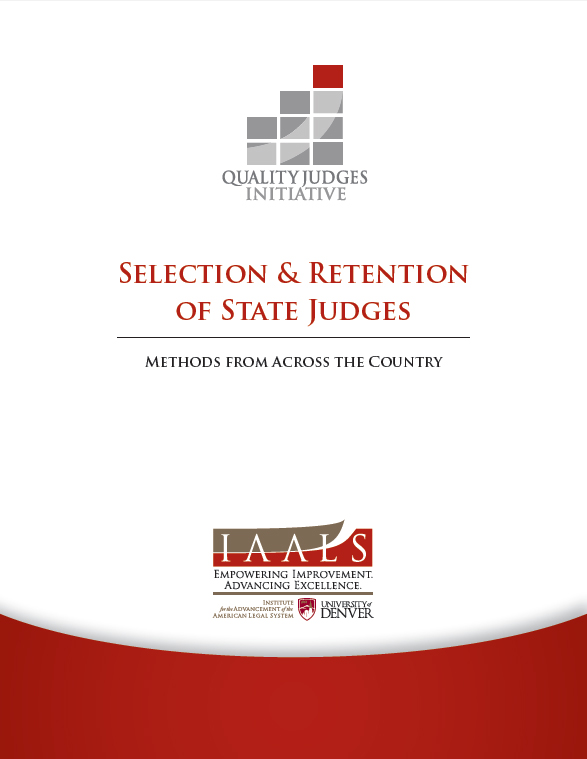 It is no surprise that there is much confusion around how judges get to be judges in the United States. No two states use the same method to select and retain their judges, and even in individual states, the method may vary by the level of court and even location. Some states elect their judges in partisan contests; in some states, governors make appointments to the bench; in others, to limit the role of politics, bipartisan committees interview and recommend candidates for appointment. And, there are still other states that do it differently, adding complication to an already complicated legal system.

As we ramp up for an election year in 2016, the Quality Judges Initiative aims to add a bit more transparency to the process. We have just released a unique resource that shines a light on each state and its specific methods for selecting and retaining judges. Read it here. Only available from IAALS, these easy-to-read charts break down how judges reach the bench, and how they stay there, across all three court levels:

We have also included information about how judicial vacancies are filled between scheduled elections, for states that elect their judges.

As these charts show, the most common methods for choosing state judges are:

When it comes to retaining judges once they are on the bench, judges in all but three states serve fixed term lengths and must be reselected for additional terms; the three outlier states have judges who are appointed for life or to age 70. The most common reselection method is retention elections, where voters are asked whether judges should remain in office (and judges don’t face off against other candidates), and reelection, where incumbent judges may face challengers for the position they currently hold.

In most states, methods for selecting and retaining judges are laid out in the constitution, but in some states, minor “tweaks” may be made by the legislature. For example, in the last year, West Virginia has moved from partisan to nonpartisan judicial elections, and North Carolina has replaced reelection with retention elections for supreme court justices.

Even more information is available in our new charts, which give an in-depth look at all the methods used across the country. Click here to download.