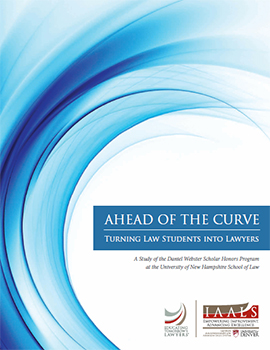 It's a big month at Educating Tomorrow's Lawyers. We're about to release our first major report—a study of the Daniel Webster Scholar Honors Program at the University of New Hampshire School of Law. I don't want to give away too much just yet, but there's plenty of good news in it—not just for the program, which is doing a bang-up job of educating its students, but also for law schools around the country because the keys to its success are replicable on small and grand scales.

The report is not even public yet, but it is already making waves. It was highlighted in a Wall Street Journal article last week (the article is behind a paywall, but you can also view the WSJ Law Blog post here) that centered on two alumni of the program who went on to start careers in large firms in New York and Los Angeles and who credit the program with their success. And it was criticized at Above the Law when Elie Mystal suggested that practice-ready programs are only valuable if they get people jobs:

So far, employers are not buying the benefit of practice-ready programs when it comes to their hiring decisions. And if employers aren't buying it, there's no reason for prospective law students to pay for it.

While we don't agree that employment is the only reason these programs matter (if graduates are better prepared, clients also benefit), Elie is right. If law schools are going to develop programs that better prepare students to be lawyers and if prospective students are going to invest their time and tuition money in those programs, then legal employers must value them. This is a pretty fundamental concept and something we're already working on in our Foundations for Practice project, which starts with a national survey asking lawyers (including, of course, legal employers) what foundations entry-level lawyers need for success. If we want legal employers and members of the legal profession to value programs that turn law students into lawyers, they should play a role in developing and sustaining them (this was the case for the DWS program, by the way).

Employers have been saying for years that they want law students to graduate ready to hit the ground running. Some law schools are responding to the call. Let's hope that employers provide the incentives for schools to continue to invest in new models of legal education.