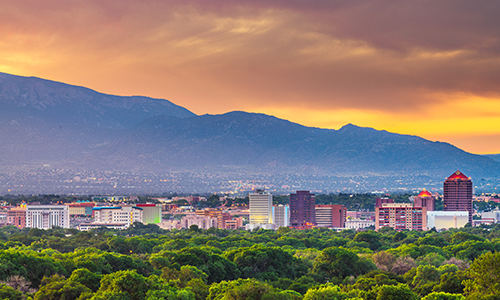 New Mexico is one of the latest states to look to regulatory innovation to increase access to legal services.

Many of the civil justice needs throughout the state are currently going unmet, due in part to the fact that New Mexico is so large and has a higher percentage of rural areas compared to the national average. According to court officials, one third of the state’s counties have 10 or fewer attorneys; three counties have no active resident attorneys at all. This problem is exacerbated by residents’ inability to afford a lawyer even if there is one close by. As a result, many people are showing up to court unrepresented and without legal guidance.

Last year, the New Mexico Supreme Court established a working group to examine this pressing issue, and in December the members submitted their report to the court, which attributed the state’s access to justice gap to the lack of attorneys in many areas, the steep costs associated with hiring a lawyer, and lawyers retiring with no one in the area to replace them. The working group recommended that the court enlist nonlawyer helpers—called court navigators—to assist self-represented litigants in navigating the system, as well as other initiatives recruiting more lawyers to the state and its rural areas.

On January 24, the New Mexico Supreme Court approved a number of these recommendations. Chief Justice Judith K. Nakamura said that “to truly fulfill the promise of equal justice under the law, we must offer more assistance for the critical legal needs of New Mexicans.” Over the next few months, the Administrative Office of the Courts will develop the court navigators pilot program. Although the particulars of the program have yet to be determined, the court navigators potentially “could help people obtain and fill out court forms, organize documents needed for cases and attend hearings to provide support for self-represented litigants.”

And, according to a Law360 article, “after the state Supreme Court approved the working group’s recommendations, the state’s Legislature heard from New Mexico Commission on Access to Justice on a strategic plan . . . to make the courts more accessible to residents.” The plan includes simplifying court forms, creating an online self-help service center, offering more self-help videos, and expanding an online service that assists people in document preparation—all consistent with the Civil Justice Initiative recommendations for improving the civil justice system and the Family Justice Initiative Principles for Family Justice Reform, both developed with the support of IAALS and endorsed by the Conference of Chief Justices.

New Mexico is also considering licensing nonlawyer professionals to take on a number of legal tasks that, under current rules, can only be performed by a lawyer. This tier of professional already exists in places such as Washington state, whose Limited Legal License Technician (LLLT) program allows specially trained paralegals to help SRLs fill out paperwork and answer any questions they may have about legal procedures. The LLLTs save SRLS—as well as judges and other court personnel—a lot of time and confusion. Not only are accessible and efficient courts good for time and resource management—they also increase the public’s overall trust and confidence in the legal system.

IAALS’ Unlocking Legal Regulation project seeks to rethink the way legal services are delivered, tapping into research, risk assessment, and technology in order to create a new regulatory framework that both protects consumers and utilizes the abundant opportunities for innovation. And, New Mexico is taking steps in the right direction by reimagining the way legal services are delivered.

Too many people cannot effectively access our legal system to protect their rights and resolve their disputes. But if we want to make legal services more accessible, we must re-envision how they are delivered. This project is about taking a bold step forward into a consumer-centered regulatory system—one that is... END_OF_DOCUMENT_TOKEN_TO_BE_REPLACED
Unlocking Legal Regulation
Civil Justice Initiative
Family Justice Initiative
New Mexico