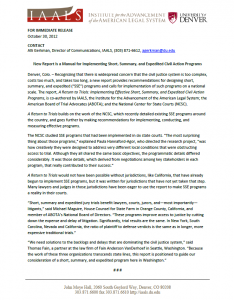 Recognizing that there is widespread concern that the civil justice system is too complex, costs too much, and takes too long, a new report provides recommendations for designing short, summary, and expedited (“SSE”) programs and calls for implementation of such programs on a national scale. The report, A Return to Trials: Implementing Effective Short, Summary, and Expedited Civil Action Programs, is co-authored by IAALS, the Institute for the Advancement of the American Legal System; the American Board of Trial Advocates (ABOTA); and the National Center for State Courts (NCSC).

A Return to Trials builds on the work of the NCSC, which recently detailed existing SSE programs around the country, and goes further by making recommendations for implementing, conducting, and measuring effective programs.

The NCSC studied SSE programs that had been implemented in six state courts. "The most surprising thing about those programs," explained Paula Hannaford-Agor, who directed the research project, "was how creatively they were designed to address very different local conditions that were obstructing access to trial. Although they all shared the same basic objectives, the programmatic details differed considerably. It was those details, which derived from negotiations among key stakeholders in each program, that really contributed to their success.” 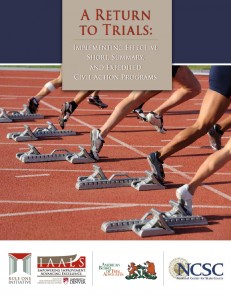 A Return to Trials would not have been possible without jurisdictions, like California, that have already begun to implement SSE programs, but it was written for jurisdictions that have not yet taken that step. Many lawyers and judges in those jurisdictions have been eager to use the report to make SSE programs a reality in their courts.

“Short, summary and expedited jury trials benefit lawyers, courts, jurors, and—most importantly—litigants,” said Michael Maguire, House Counsel for State Farm in Orange County, California, and member of ABOTA’s National Board of Directors. “These programs improve access to justice by cutting down the expense and delay of litigation. Significantly, trial results are the same. In New York, South Carolina, Nevada and California, the ratio of plaintiff to defense verdicts is the same as in longer, more expensive traditional trials.”

“We need solutions to the backlogs and delays that are dominating the civil justice system,” said Thomas Fain, a partner at the law firm of Fain Anderson VanDerhoef in Seattle, Washington. “Because the work of these three organizations transcends state lines, this report is positioned to guide our consideration of a short, summary, and expedited program here in Washington.”