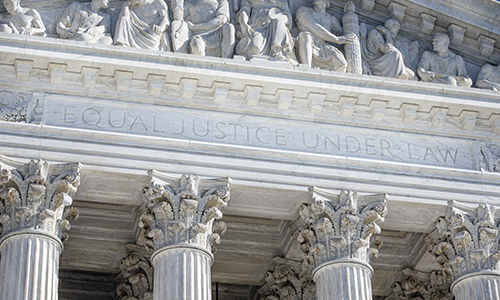 It’s no secret that the United States is facing an access to justice crisis. Our justice system is failing. We are failing to uphold what the country’s founding fathers upheld as their ultimate goal and virtue: justice for all. George Washington himself said, “the due administration of justice is the firmest pillar of good government”; Alexander Hamilton famously stated that “the first duty of society is justice”; and Thomas Jefferson said, “the most sacred of the duties of government is to do equal and impartial justice to all its citizens.” And yet every hour of every day, countless Americans go without legal assistance as they face a system designed by lawyers, regulated by lawyers, and one which profits only lawyers. The legal system has been regulated so tightly that it has led to a world where only a fraction of the citizens who require legal services can access them. Consequently, the current regulatory scheme has led to a black market of legal services and innovation stagnation in the evolution of legal services.

Reregulation, rather than deregulation, is the answer to these problems and stands at the heart of the worthy efforts of groups in Utah, California, Arizona, Illinois, and other states presently advocating for a rethinking of the existing legal regulatory schema. The idea is not deregulation, but rather reregulation, fueled by certified and regulated professionals who can deliver value at different steps of an individual’s legal journey.

Today’s regulatory framework forces most individuals into a Hobson’s choice: they either face the legal system alone or take their chances with a black market representative. Without a tiered system of certified professionals delivering legal services, mirroring that of what we see in the world of medicine, individuals can either afford legal representation or they cannot. Those who cannot afford legitimate legal representation then obtain legal services through a black market of unaccredited legal service providers. What about civil legal aid, you ask? Annual federal funding for civil legal aid amounts to less than what Americans spend each year on Halloween costumes . . . for their pets. This black market of legal services continues to exist and grow due to protectionist regulation that must be unlocked, rethought, and reimagined.

In my opinion, anecdotal hyperbole centered around so-called notarios is not only predicated on thinly veiled racism—it is also the kind of uninformed rhetoric that desperately relies on half-facts to shore up the status quo. Most importantly, it distracts intelligent people from the most important point at hand, which is that all people—regardless of their mother tongue or socioeconomic status—should have access to good legal assistance.

In many low-income and immigrant communities, like the one I grew up in, a college degree is either prohibitively expensive or may not be considered an option to begin with. How then can members of these communities be expected to find a competent attorney who understands their needs, if none exist? Consider as well that members of this community also speak non-fluent English, and you begin to understand the lack of legal service supply in these communities. We need to reregulate as it is clear that our current framework, which requires an all-out prohibition of legal assistance by anyone other than a lawyer, only serves to strengthen the systemic racism that these groups already face on a daily basis.

In typical lawyer fashion, we have allowed perfect to become the enemy of good. A lack of tiering and specialization of labor in the legal industry then creates an innovation vacuum as lawyers have been forced to become jacks of all trades and are unable to collaborate, delegate, or systematize their practices. Through an absolute prohibition on nonlawyer ownership of law firms, we have created a system where an individual who has worked hard to earn their Juris Doctor must also simultaneously perform the functions of someone who has earned a degree in business, in accounting, in computer science, in social work, and in psychology. How can we expect thoughtful innovation, with or without technology, within law when we freeze out those who specialize in what lawyers most need assistance with? I imagine a world where an attorney can team up with an MBA recipient, a social worker, and a computer scientist to open a highly profitable law firm where each of them benefits equally as owners. Again, our professional regulation as it currently stands does not allow this.

IAALS, an organization on whose Board of Advisors I am proud to serve, recently launched their Unlocking Legal Regulation project, which does an admirable job of both keeping its readership up to date on regulatory innovation currently happening in states across the country, as well as acting as a nexus for literature, events, and initiatives focusing on this important mission. And, IAALS is partnering with Utah to pilot test what a better regulatory system could look like.

We cannot afford to fail those who cannot afford legal representation. We cannot afford the continued decay of the justice system to the detriment of the American citizenry. We cannot afford to not consider unlocking legal regulation when it is so very clear our current system of regulation is failing all of us, every single day. The words “equal justice under law” are etched into the façade of the Supreme Court. It is time that we start living these words. It is time we reregulate the delivery of legal services in a way that ensures equal access to justice, in form and in substance, regardless of mother tongue or economic status. More money should never mean more justice.

Unlocking Legal Regulation
Too many people cannot effectively access our legal system to protect their rights and resolve their disputes. But if we want to make legal services more accessible, we must re-envision how they are delivered. This project is about taking a bold step forward into a consumer-centered regulatory system—one that is competitive, broadly accessible, and better meets the needs of the people.
Read More
Expert Opinion
Guest Posts
Unlocking Legal Regulation