Short, Summary, and Expedited Trial Programs Across the Country in 2014 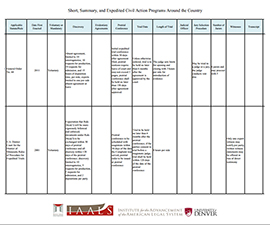 In 2014, we have continued to see a rise in the number of, and interest in, alternative processes designed to provide a more streamlined approach to the pretrial and trial process. While these programs are known by many different names—“Expedited Trial Program,” “Short Trial Program,” “Individualized Trial Program”— regardless of their title, they focus on increasing access to our civil justice system.

Last year, given the number of programs that have been implemented nationwide, and their diversity, we published a chart of these programs. The chart provides a visual breakdown of the various programs and catalogs their unique elements. We now offer an expanded version of our chart of Short, Summary, and Expedited Civil Action Programs Around the Country, which provides an even more fulsome summary of these programs. The updated chart outlines additional programs that have been in existence for a number of years, and includes new programs that have been adopted in 2014, such as Iowa's expedited civil action rule, which goes into effect January 1, 2015.

New Jersey remains a jurisdiction to watch as we move into 2015. In April 2014, the New Jersey Supreme Court Advisory Committee on Expedited Civil Actions issued a report recommending a number of ideas to improve the timeliness of civil cases, including a mandatory pilot program focused on streamlining pre-trial and trial procedures so as to achieve a more efficient and less costly resolution. The Committee recommended adoption of the pilot program for all Track 1 and Track 2 cases (property and contract disputes and insurance suits) in a few counties. Chief Justice Stuart Rabner, who formed the committee in May 2013, noted in the press release in April:

The recommendations of the committee help address access to justice issues in civil cases.  Under the proposed pilot project, parties would be able to have their day in court and proceed to trial more promptly, the cost of discovery and litigation as a whole would be more affordable, and judges could oversee cases more effectively.

For those currently considering such a program, we also recommend review of A Return to Trials: Implementing Efficient Short, Summary, and Expedited Civil Action Programs. In collaboration with the American Board of Trial Advocates (ABOTA) and the National Center for State Courts (NCSC), IAALS convened a committee of experts from around the country to brainstorm best practices for designing, implementing, conducting, and measuring effective programs that provide such benefits. This publication collects those recommendations in a manual for courts that are interested in implementing such programs, as well as those seeking to improve the programs already in place.