Ten Years of IAALS: Refining Our Understanding of the Self-Representation Phenomenon 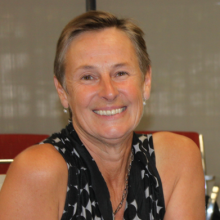 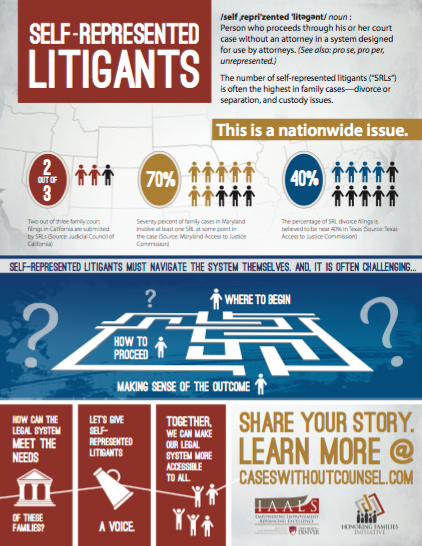 When I was first contacted by IAALS in early 2014 about the possibility of replicating the methodology used to investigate the lived experiences of self-represented litigants in three Canadian provinces, I was thrilled.

I had spent the previous two years conducting this (qualitative, interview-based) research and our results were published in 2013. While the data revealed many multi-layered complexities, diversities, and variables in the experiences of those without counsel, it underscored one new reality.

Simply summarized: those who represent themselves are not making a “choice” that is inherently mad, bad, or deluded. The self-represented cannot afford—or cannot go on affording—to pay for full representation by a lawyer. At the same time, they are overwhelmed, intimidated, and frightened to be facing a life crisis without an expert advocate by their side.

This was a simple, but critically important message for those working in the Canadian legal system. It challenged some of our entrenched assumptions about self-representation (that was a real “choice”). It highlighted the dignity and the struggles of many self-represented people. And it challenged justice system professionals to be more compassionate, informed, and creative in how they thought about and worked with the self-represented.

The 2013 National Study created so much interest that my original plan—to write a book about the study, and then move on to a new area of research—was shelved in favor of continuing to work on what we dubbed The National Self-Represented Litigants Project or NSRLP. As NSRLP began to expand its reach—our website was visited by people from 87 countries in 2015—IAALS came to us with their proposal for a U.S. qualitative study in four states. The results of that study are being analyzed now, to be released in the coming months. And the rest, as they say, is history.

It is a very happy history. It has been our absolute pleasure to work with the dedicated IAALS team in the Honoring Families Initiative, and to support them in their work on the Cases Without Counsel project.

Our symbiosis flows from our shared understanding of the challenges, and their significance for both justice system actors and users going forward. The “new normal”—more than half of family litigants are now without counsel—is perhaps the biggest earthquake to rumble through the family justice system in 50 years. The simple fact changes everything: from the work of lawyers representing clients, to the role of family judges, to public services services programming and priorities—and how we think about “access to justice” for the majority of Americans (and Canadians, and Brits (the Lord Chancellor’s Report 2010), Australians (the Dewar Report 1990), and so on) who cannot afford full representation throughout the legal process.

With its Cases Without Counsel data and its wealth of experience in harnessing the creativity and commitment of justice system professionals, IAALS is now in an excellent position to begin to make and promote recommendations for change that will directly benefit self-represented litigants in the United States. 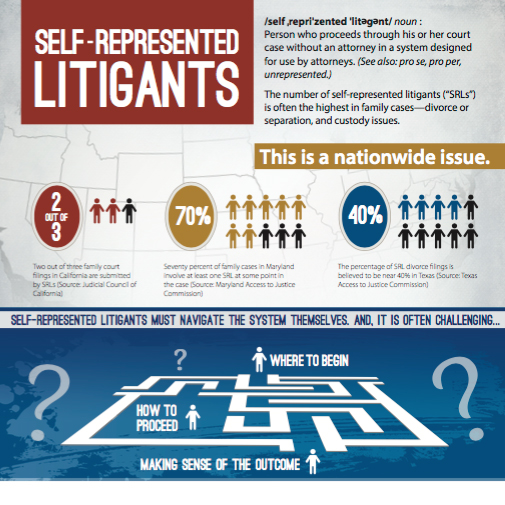