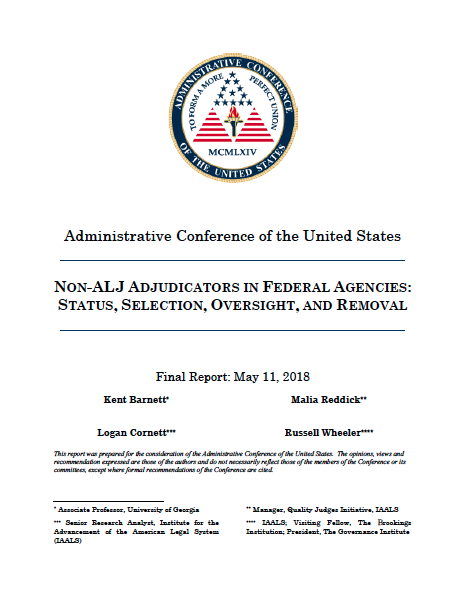 IAALS’ recent report to the Administrative Conference of the United States described a large but relatively unknown group of executive branch adjudicators who are not "Administrative Law Judges" (ALJs) governed by the Administrative Procedure Act. Like ALJs, these "Non-ALJs" preside over—or hear appeals from—adjudications in which one of the parties can obtain an oral hearing to present evidence (even if parties rarely request hearings). The difference is that the APA does not govern their appointment, tenure, and employment conditions.

ALJs, who number over 1,900 (with the great majority in the Social Security Administration), are well known to administrative law scholars and practitioners. "Non-ALJs" constitute something of a hidden judiciary, but a very large one. Perhaps the most revealing finding in IAALS' report, Non-ALJ Adjudicators in Federal Agencies: Status, Selection, Oversight, and Removal, is simply how many there are—about 11,000, vastly out numbering the ALJs (as well as the over 2,000 judges in the federal judicial branch).

The report identified 37 separate types of Non-ALJs, who serve in at least 30 federal agencies and go by 23 titles; less than 1,000 Non-ALJs are called "judges". Three-fourths are Commerce Department patent examiners and appellate patent judges, but there are also between 300 and 800 Non-ALJs each in the departments of Justice, Treasury, and Veterans Affairs and the National Labor Relations Board.

IAALS’ report describes principal Non-ALJ characteristics, giving special attention to the degree to which agencies that employ them seek to protect their impartiality. The report does so in part by comparing measures that protect ALJ impartiality with rules and less formal mechanisms often governing Non-ALJs, including policies embodied in agency customs. The report draws heavily on a 2017 survey of federal agencies that the report authors conducted with ACUS' assistance. This summary often uses comparative terms rather than the precise numerical measures that are fully displayed in the report itself.

Selection and Removal—Until recently, ALJs were hired on a merit basis after taking a competitive examination administered by the Office of Personnel Management, which ranked candidates and presented the agency in question with a list of qualified candidates from which to choose. In July 2018, a Trump Administration executive order abolished that system and vested ALJ appointment solely in department heads. Although citing the Supreme Court’s June 2018 Lucia decision (holding that ALJs are "Officers of the United States" and thus subject to the Constitution’s clause requiring appointment by department heads), the administration would likely have issued the order regardless, reflecting suspicion of the so-called administrative state and what some regard as overly powerful civil servants, and long-standing concerns over the difficulty of hiring ALJs. (Senators Cantwell and Collins have introduced S. 3387, to reverse the executive order, arguing that selecting ALJs through the competitive service reduces the influence of partisan factors in their selection.)

Agencies employ varied procedures for selecting Non-ALJs, which do not include the same kind of competitive selection processes long in place for selecting ALJs. The most common hiring qualification for Non-ALJs is a law degree, followed by candidates' demeanor. Outside candidates for relatively few Non-ALJ types (seven) must take a written examination, although the number is slightly higher, somewhat oddly, for internal candidates.

Specific statutory provisions protect ALJs from at-will removal. They may only be removed for cause. Almost all Non-ALJs have no such protection, aside from general civil service protections.

Agency as Party to Hearings—Non-ALJs preside over 47 types of hearings, roughly categorized as disputes over government benefits, contracts, and employment, and disputes over licensing matters and between private parties. (One type of Non-ALJ conducts more than one type of hearing.) None of the six categories of hearings dominates their collective dockets.

One indicia of Non-ALJ impartiality is whether their agency (which determines their salary and other conditions) is a party to and thus stands to benefit from their adjudications, especially because Non-ALJs lack some other impartiality protections that ALJs enjoy. In fact, agencies are parties to about half of the 47 hearing types, and the Non-ALJ decision is final in about half the hearing types (excluding those that are mainly appellate themselves).

Ex Parte Communications—Several APA provisions bar ALJs from communicating ex parte with anyone about the facts in a proceeding, although they may discuss legal issues with non-prosecutorial-or-investigative personnel. Agencies are generally stricter as to Non-ALJs, prohibiting all ex parte communications for a majority of the 37 types, especially those in enforcement matters and agency-as-party proceedings.

Physical Separation—Although not required by the APA, some scholars and practitioners believe that physically separating adjudicators from non-adjudicatory agency personnel can enhance adjudicators' impartiality by walling them off from "water-cooler interactions." Agencies provide physical separation for about half the Non-ALJ types.

Recusal—Agencies require 31 of the 37 Non-ALJ types to recuse themselves from adjudications if they believe they cannot adjudicate impartially, although for only about half of the 31 are the requirements embodied in regulations.

To encourage ALJ impartiality as to the agencies that employ them, the APA prohibits those agencies from subjecting them to performance appraisals or paying them bonuses. By contrast, agencies conduct such appraisals for almost all their Non-ALJs. Most of the appraisals include assessments, many loosely structured, of whether non-ALJs meet agency case-processing goals; reviews of ALJ decisions are also fairly common. And, although Non-ALJ annual salaries are generally lower than those of ALJs, most Non-ALJs are eligible for bonuses.

The report, which is available on the ACUS website as well as from IAALS, will appear in volume 52 or 53 of the Georgia Law Review. Its principal author is Georgia Law School Professor Kent Barnett. IAALS’ Malia Reddick, Logan Cornett, and Russell Wheeler also contributed. 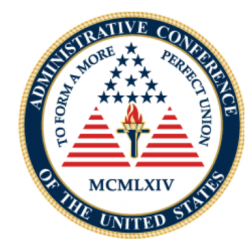